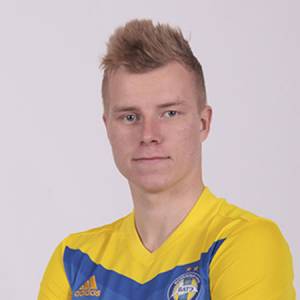 Nemanja Milunovic is a professional footballer from Serbia who currently plays as Center-back for National Team of Serbia and Belarusian football team, BATE Borisov. The 28-year-old footballer played for Borac Cacak, and Mladost Lucani previously.

Future AG is the agent of Nemanja Milunovic.  He was the member fo the Mladost Lucani that won Serbian First League in 2013-014.

Nemanja Milunovic was born on May 31, 1989, in Cacal, SFR Yugoslavia. Regarding his nationality, Milunovic is Serbian. His father's name is Bogomir Milunovic.

Milunovic currently earns €30K as weekly wage i.e. $1.5 million in a year. However, his exact net worth is not disclosed yet. Out of his big amount of money, he currently lives a lavish and comfortable life. We can assume his net worth to be about $2 million.

Nemanja Milunovic began his career as a member of the professional football club, Borac Cacak. For the club, he scored 1 goal in 4 appearances.

He then extended his loan contract with Lucani for the 2010-2011 season where he played 26 games.

On August 1, 2010, Milunovic was transferred to Mladost Lucani. Later, he left the club in 2015 after making 96 appearances scoring 12 goals.

Milunovic was signed by Belarusian football team, FC BATE Borisov on March 6, 2015. He has so far scored 6 goals in 54 matches.

On May 25, 2016, Milunovic earned his first international cap under the coach Slavoljub Muslin in a 2-1 win against Cyprus, in an international friendly.

He scored his first international goal against Israel in a friendly match at Karadorde Stadium, Novi Sad, Serbia.

Milunovic, along with Stefan Mitrovic, Jagos Vukovic, and Uros Spajic, was called up for the national team in the last twelve months.

Nemanja Milunovic doesn’t like to talk about his private life, and he carefully avoids gossip as well as fan questions.

Currently, Milunovic does not have serious relationships. His followers suppose that he doesn’t have a girlfriend at the moment. Milunovic is possibly single right now, as he hasn’t really spoken about it.

Nemanja Milunovic is 6 feet 4 inches tall in height and his weight is above 86kg.