Nate Oats is a well-known American basketball coach who has been working as the head coach since 2015 and is among the top coaches in the league. Nate currently coaches the University of Alabama. He won MAC Coach of the Year in 2018 and 2019 when his team won the MAC East Division and MAC regular season.

Nate Oats was born Nathanael J. Oats on October 13, 1974, in Watertown, Wisconsin. Nate rose to fame only after his successful career and has not shared much information about his early life. Nate holds an American nationality and is of white descent. Nate started his career as a basketball player but started coaching shortly after his graduation. Oats holds a Master's Degree from the University of Wisconsin-Madison in Kinesiology and exercise science.

Nate started working as an assistant coach for Maranatha Baptist University in 1997. He worked with the team until 2000 and then moved to Wisconsin-Whitewater and served as an assistant men's basketball coach for the Division-III University of Wisconsin-Whitewater. Nate worked with the team until 2002 and then resigned to start working as the head basketball coach and a math teacher at Romulus High School in Detroit.

Oats worked as the head coach with the High School team until 2012. In his eleven years with the High School, He has a record of 222-52 and led the team to a 27–1 record and a state Class A championship. Nate won coaching awards in 2005, 2008, and 2009. In 2013, Buffalo University recruited him as their assistant coach. In his first two years with the team, They won their first Mid-American Conference Tournament.

In late 2015, Buffalo university announced Nate as their head coach. In his four years with the team, He took his team to three MAC Tournament final and won them. Although Nate had a contract with the team until 2019, The head coach joined Alabama Crimson in 2019 and has already won numerous titles with the team and has been highly successful.

Nate Oats has an estimated net worth of more than $10 Million. He has an annual salary of $3.225 Million as of early 2021. Oats extended his contract with Alabama in 2021 until 2027. His salary increased from $2.45 million a year to $3.225 Million. His income includes several other bonus amounts.

Oats had an annual salary of $800,000 while working as Buffalo's head coach from 2015 until 2019. Geno Auriemma is another basketball head coach with a base salary of $2.7 Million working for the Connecticut Huskies Women's basketball team.

Yes, You read that right. Nate is the proud father of three children. Nate tied his wedding knot with Crystal Oats in the mid-2000s. The basketball head coach has become successful in keeping his personal life away from the media. He has three daughters,  Lexie, Jocie, and Brielle, with his wife, Crystal. 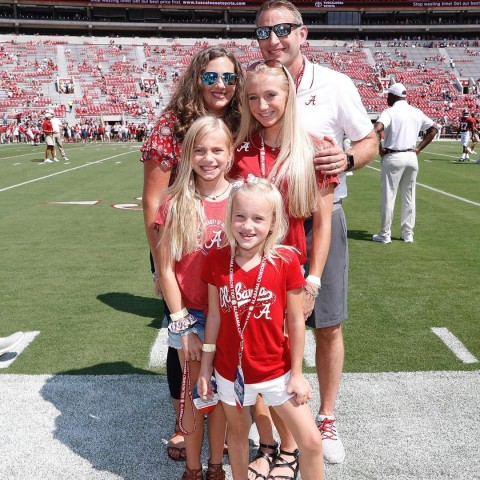 CAPTION: Nate shares a photo with his family a game SOURCE: [email protected]

In 2015, Oats opened about his wife going through chemotherapy and has become free of lymphoma in 2021.