Natasha Mack is a rising American basketball player. She is currently playing in the Women's National Basketball Association for the Minnesota Lynx. Mack plays as a Forward for her team. Chicago Sky drafted her in the Round two overall 16th pick in the 2021 WNBA draft. Natasha was named the Big 12 Defensive Player of the year.

Natasha Mack was born on November 3, 1997, in Lufkin, Texas. She is the daughter of Bonnie Mack and her husband, Anthony Mack. Much about her parents and siblings is under the radar. Mack graduated from Lufkin High School and enrolled at Angelina College. Natasha stands six feet and four inches tall and weighs 82 kg.

Natasha was part of her High School basketball team and was ranked as a four-star prospect after high school and was recruited to play at the University of Houston. However, The transition was not smooth, and the player moved back to her hometown and then joined Angelina College. Natasha was selected to a junior-college all-star event after her first season and was named a junior-college All-American. Eventually, Mack won the NJCAA Player of the Year Award after her sophomore season. 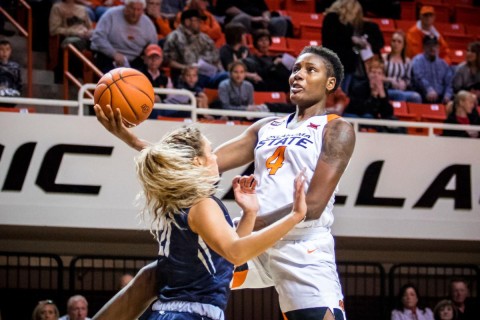 Natasha tries to score a point for the team in a game SOURCE: Tulsa World

Natasha averaged 24 points per game in her sophomore year and then moved to Oklahoma State University in her junior year. She had a huge impact on the team and was selected to the Big-12 All-Defensive Team First-Team. For her senior year, Mack was named Big 12 Defensive Player of the Year. Natasha averaged 18.7 points per game in her college career. After her graduation, The player listed her name for the 2021 WNBA draft.

Chicago Sky drafted Natasha in the second round, overall 16th pick of the 2021 WNBA draft. She had ups and downs with the contract and was eventually let go by the team in May. Shortly after that, Mack signed a contract with the Minnesota Lynx. The forward has appeared in three games this season and averaged 2.0 points and 1.3 rebounds in 5.3 minutes per game with Chicago.

Who is Natasha Mack Dating? Know About Her Relationship Status and Boyfriend

Natasha has not uttered a single word about her love life in public. Unlike other player's She does not show a presence on social media. Mack has successfully kept her personal life away from the reach of the media. There is no rumor of the player dating someone in public. Natasha seems to be enjoying the single life. She is very early in her career and must focus on making a good career and starting her love life.

Natasha Mack has an estimated net worth of more than $100,000. She has not disclosed the economic aspects of her life. Mack is very much early in her career. The salary of a WNBA player ranges from $50,000 to more than $200,000. DeWanna Bonner is the highest-earning WNBA player in 2021.