Also, a former wrestler he has competed at the American wrestling promotion, Total Nonstop Action Wrestling.

Muhammed Lawal’s Net worth and Salary

As of 2019, Lawal has an estimated net worth of $0.5 million. Lawal's MMA career disclosed earning is reported to be about $415,000. He recently had a fight against Ryan Bader at Bellator 199 where he was defeated via KO. His earning in the event is yet to be revealed. 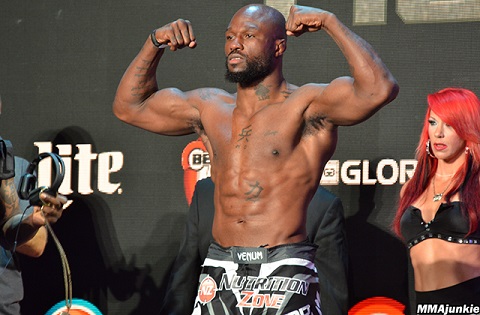 At Bellator 154, he faced Phil Davis and faced defeat via unanimous decision. He was paid $30,000 despite the loss.

Looking at his professional MMA career, his total net worth is estimated to be above $ 350,000.

Currently, 36, he stands at a height of 5 feet 11 inches and weighs around 96 kg. There are no rumors about the MMA fighter having any sort of rumors of him having any girlfriend or wife.

As per our record, he is possibly single and unmarried.

Muhammed Lawal is of American nationality having an African ethnicity through his parent who was of  Nigerian descent.

He was born on January 11, 1981, in Murfreesboro, Tennessee, the USA to a Muslim household. His father committed suicide and was raised by his mother, Nike Rousseau along with his two siblings: brother, Abdullah, and sister, Aminat.

Growing up, he was fond of wrestling and began wrestling for several school and colleges before taking up mixed martial arts training.

He made his debut against Travis Wiuff at the event Sengoku 5 and lost via KO in the first round.

Lawal later took on Fabio Silva at Sengoku 6 on November 1, 2008, and won via strikes in the third round and later on went to compete for M1 Global in 2009.

He later went on to signed for American MMA promotion, Strikeforce in 2009 and won the  Light Heavyweight Championship of the promotion from Gegard Mousasi on April 17, 2010, via a unanimous decision.

Lawal lost the championship to Rafael Cavalcante via TKO in the third round on August 21, 2010.

After being released by Strikeforce, he signed with fellow American promotion, Bellator Fighting Championships in the summer of 2012.

He made his debut in the Light Heavyweight tournament in 2013 and took on Przemyslaw Mysiala with a right hook in the quarter-final and later on lost to Emanuel Newton in the semi-final stage of the tournament at Bellator 90 on February 21, 2013.

Lawal was expected to compete against Tom DeBlass at Bellator 131 but to DeBlass, he instead took on  Joe  Vedepo November 15, 2014, and won via TKO in the third round.

He went to Japan and joined the Japanese MMA fighting promotion, RIZIN from Bellator and took part in the eight-man tournament and was supposed to face Mark Godbeer but instead took on Brett McDermott and won via KO in the first round.

Lawal went on to win the Rizin 2015 Heavyweight Grand Prix Championship by defeating Jiri Prochazka via knockout in the first round.