Katherine Kirk is a well-known Australian professional golf. She has been playing in the LPGA Tour and the ALPG Tour. Kirk turned professional in 2003. Katherine has won eleven major titles in her professional career, including three LPGA Tour, one Ladies Europea Tour, Six ALPG Tour, and two Symetra Tour.

Katherine Kirk was born Katherine Hull on February 26, 1982, in Brisbane, Queensland. She is the daughter of Frank Hull and his wife, Pauline Hull. Kirk has not shared a word about her parents and her early life. After graduating from High School, Katherine enrolled at Pepperdine University and graduated with Sports Administration. Kirk stands five feet and ten inches tall and weighs 66 kg.

Katherine Kirk's Net Worth and Earnings

Katherine Kirk has an estimated net worth of more than $5 Million. She has been earning much of her net worth through her career in golf. However, Kirk made her LPGA debut in 2004 but could not earn much in her initial days. Katherine crossed her $1 Million marks in 2008 when she became a Rolex First-Time Winner at the CN Canadian Women's Open. 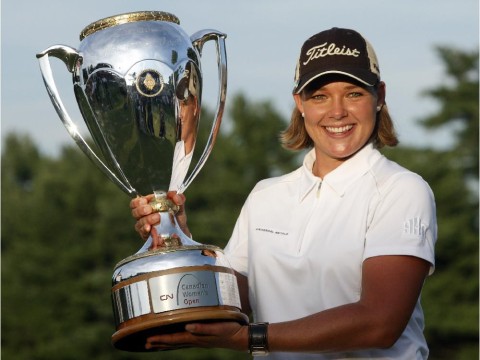 In the 2009 and 2010 seasons, Katherine earned more than a million and crossed her $3 Million marks in career earnings at 2011 Sime Darby LPGA Malaysia. In 2012, She took home $376,000 from twenty-six events. In the next two seasons, Kirk earned a combined net worth of $500,000 from fifty events. In 2015, The Australian golf player made just $70,000 from twenty events. The following year, She earned $70,000 from seventeen events. Many speculated her to retire from her career.

Katherine is a married woman living a happy married life along with her husband. Katherine tied her wedding knot with Tom Kirk on August 2, 2012. They had a private wedding ceremony in their hometown. The duo first met each other in 2009 and dated for three years before marriage. Both of them do not show much presence on social media. They have become successful in keeping their personal life away from the public. There is not a single word whether Kirk has any child or not.

Katherine turned professional right after graduating from the University. She collected eight collegiate wins during her college career. Kirk made her professional debut on the Duramed Futures Tour. The player won her first professional event at the Aurora Health Care FUTURES Charity Golf Classic. In 2006, Hull won two events on the Australian Ladies Professional Golf Tour.

Katherine earned her first win on the LPGA Tour at the 2008 Canadian Women's Open. She opened the 2009 season with a win in the ANZ Ladies Masters. In 2017, Kirk won her last LPGA event at the Thornberry Creek LPGA Classic.