An American soccer player, Miles Robinson is currently signed to Atlanta United and plays as a defender. He played college soccer for the Syracuse Orange of the Syracuse University and started playing professionally with FC Boston in 2016.

The Atlanta defender was born as Miles Gordon Robinson in Arlington, Massachusetts, United States. He was born on March 14, 1997, and is 23 years old as of 2020. He has a sibling sister named Becca Robinson. He is 1.88 m (6 ft 2 in) tall in height. Scroll down to know more about the American defender including his earnings from Atlanta.

Miles Robinson Salary and Net worth

Playing professional since 2016, Miles Robinson is at the start of his career and is currently signed to Atlanta United of the MLS where he earns an annual base salary of $145,000. His earnings with Guaranteed Compensation is reported to be $205,000. Josef Martinez is the highest-earning player of the Atlanta United with the base salary of $3 million.

Miles' annual salary in 2019 was the same as what he earns in 2020. Besides, he makes additional earnings from the national team and also gets good cash from endorsement deals and promoting several products on media and social accounts. He frequently promotes Adidas and wears the shoes designed by the company during his matches.

His net worth with the wage from the club, national team, and money from several sponsorship and endorsement deals is reported to be around $1 million.

The-23-year-old Robinson is unmarried but is reportedly dating his girlfriend named Zoë Viktoria. His girlfriend Zoe is also a Syracuse University Alumna and probably met her partner Miles while studying at the college. 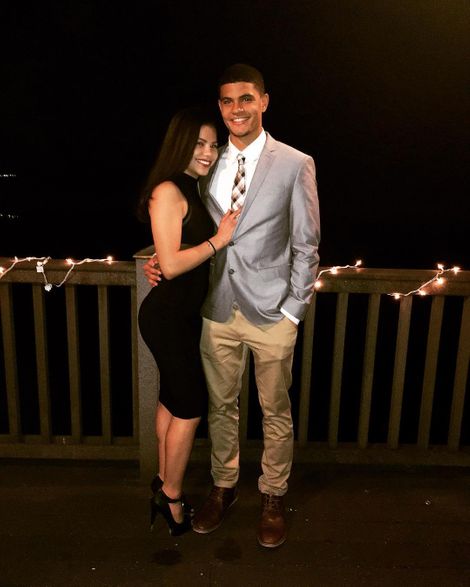 Miles has shared only one photo of them on his social media. Besides, there is not much information about their relationship. They might be together for around half-decade.

The Atlanta defender joined the youth team of FC Bolts Celtic in 2010 while he was 13 years old. He trained with the team for 4 years and left to attend Syracuse University where he played for the college team Syracuse Orange for two seasons until 2016. He was named the ACC Defensive Player of the Year in 2016.

Robinson then declared for the MLS draft and was picked 2nd overall in the 2017 MLS SuperDraft by Atlanta United. After playing for a year, he signed with Atlanta United in 2017 and played 46 matches. He was loaned to Charleston Battery for the 2017 season where he made 6 appearances.