Midwest City, Oklahoma native, Mike Gundy was born on 12th August 1967, under the star sign Leo. The fifty-four years old holds an American nationality and is of white ethnic background. He is the son of Ray Gundy and Judy Gundy. Further, he has a brother Cale Gundy, a former collegiate quarterback at Oklahoma in the 1990s who is currently OU's Assistant Head Coach, Inside Receivers Coach, and Directors of Recruiting.

Upon graduation from Oklahoma State University (earned degree in secondary education with a focus in social studies), Gundy joined Pat Jones' staff as an assistant coach. By 1990, he was already a wide receiver coach and then quarterback coach from 1991–1993 and offensive coordinator from 1994–1995.

In 1996, he served as a quarterback coach and passing game coordinator for Baylor.

After that season, he moved to Maryland, serving as wide receiver coach and passing game coordinator from 1997–2000 for the Terps. How Much Is Mike Gundy's Net Worth In 2021? Salary & Contract

In October 2021, Gundy agreed on a new “perpetual” or rolling 5-year contract with Oklahoma State. Signing the deal, he not only got a raise but saw an increase in the buyout total that Oklahoma State would owe him for terminating the contract without cause.

Among three, Gunnar (born on 14th November 2001) is playing his freshman season at Oklahoma State.  He played high school football at Stillwater with several school passing records, including career touchdowns. 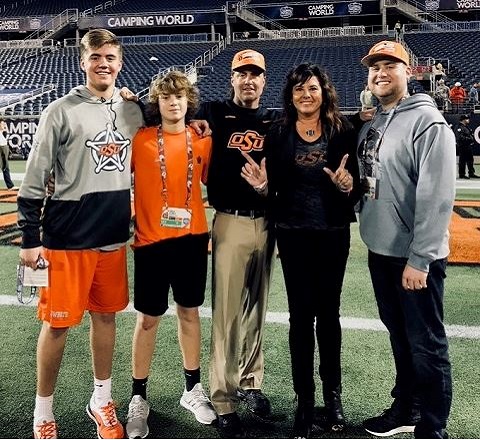 The Gundy family prefers a low-key over the spotlight however they sometimes appear with Mike on some events.