Michelle Sung Wie, Korean name as Wie Sung-Mi, is an American professional golfer by profession who plays on the LPGA Tour. A professional since 2005, Michelle joined LPGA in 2009 and has recorded 5 professional wins since.

Michelle Wie Net Worth Over $12 million

Michelle has an estimated net worth of around $12 million as of 2021, including all of her properties and earnings. The significant source of her earning is her professional golf career. Further, her career disclosed earning is reported $6,801,108. In 2007, she was ranked #4 among the Top 20 Earners Under 25 list by Forbes.

@cadillac , call me & @gatsbythesheepdog ... we loveee the new Escalade

Despite fewer victories, she made it to the list having an annual salary of $19 million. Additionally, in 2012, she earned $158,546 as career season earnings which eventually led her to separate from her working partner Woolley.

Apart from her earnings from the professional career, she endorses brands like Nike, McDonald's, Kia Motors, and Sony.  Michelle can also be seen as engaged in various charity works and events. Adding up, she owns a million-dollar mansion in Jupiter, Florida (FL), US.

Married to Jonnie West; How is their Marital Life?

Michelle Wie was in a relationship with Robin Lopez, a professional basketball player for the New York Knicks of NBA. The couple first met at Stanford University. When asked about their relationship, they never went public about their affair. The couple started dating in 2008 and ended a few months after. 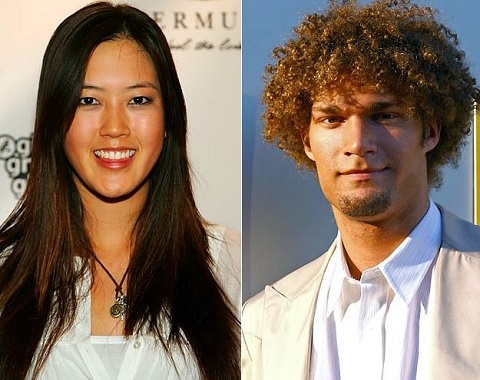 Further, she started dating Adam Zahn, a former basketball player. Rumors started in July 2016 when the professional golfer shared a picture of the two hanging out together. 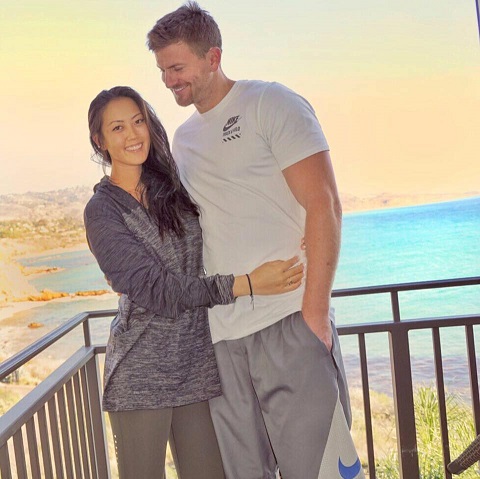 In terms of popularity, the golfer is a bit ahead of the basketball player. However, their love affair could not sustain long and parted ways and she even deleted the earlier shared picture.

Later, she began dating Jonnie West. They are all set to get married soon after LPGA star said “Yes” to boyfriend Jonnie West after he popped the question and asked for her hand in marriage.

Wie took to Instagram to make public her engagement to the son of former NBA great Jerry West. Her Fiance, Jonnie works as an executive in the front office for the Golden State Warriors. 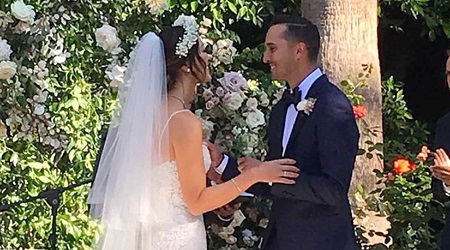 On August 10, 2019, the couple tied the knot at a private home in Beverly Hills, California.

She has a huge fan following and grabs the maximum attention wherever she goes. But, this never caused any problem in their love life. She currently resides in Jupiter, Florida, U.S.

Like other celebrities, Michelle also has a ton of controversies throughout her life. One of the huge controversies was aroused when Wie missed the cut at the 2007 Sony Open by 14 shots. The critics doubted whether she could make it or not.

The other one was when she hired and fired lots of caddy after when her father stopped being her caddy. The misinformation about her wrist injury also created a lot of buzz in the media. She is a good friend of Lydia Ko.

The beautiful and talented golfer stands 6 ft. 1 in. tall with a weight of 68 kg. T

Michelle Wie was born as Michelle Sung Wie on 11 October 1989, to Korean-American parents, Boo Wei and Byung Wook-Wei. She was born and raised in   Honolulu, Hawaii, the United States.

She belongs to a Korean ethnicity however, she holds an American nationality. The player with dual citizenship of Korea and the U.S. finally renounced Korean citizenship in 2013.

Michelle had a keen interest in sports, especially golf from a young age. She started to play golf when she was just 4 years old and amazed everyone with her talent. She did her schooling at Punahou School, Honolulu. Later, she joined Stanford University for her further studies where her grandfather was a visiting professor and her aunt and uncle too graduated from the same university. She graduated in 2002 with a major in Communications.

Thank you to everyone who came out to support me this week!!!! Olympia Fields was such an awesome course!! @nikegolf @omega @callawaygolf @davidleadbetter

She won her fourth LPGA Tour event and a first major championship, the U.S. Women's Open defeating Stacy Lewis on 22 June 2014 To date, she has won 4 LPGA Tour with 1 major championship and 3 other LPGA Tour wins and is planning to win more in near future. She has also been the winner of various tournaments before turning into a professional.