Michael Frolík is a Czech professional ice hockey player who plays in the National Hockey League (NHL). As of 2019, Michael Frolík currently plays for the Calgary Flames as their Right Wing. Michael Frolík has played for other teams like HC Kladno, Florida Panthers, Chicago Blackhawks, Winnipeg Jets.

Michael Frolík reportedly earns around $4,300,000 as his yearly salary from Calgary Flames. He has an estimated net worth of over $20 million.

Michael Frolik's Net Worth and Salary

As of 2019, Michael Frolík has an estimated net worth of over $20 million which is similar to that of Ron Hainsey. He reportedly signed a five-year contract worth of $21.5 million with Calgary Flames.

Michael Frolik is currently in a relationship with his girlfriend Diana Kobzanova. The couple has two daughters Ella born in 2014, and Lily. Michael and his girlfriend Diana are not married yet but might be planning to tie the knot soon since they are the parents of two beautiful daughters.

Frolik's future wife Diana is a beauty queen who represented her country Czech Republic in the Miss Universe 2002 held in Puerto Rico and is also the former Miss Czech Republic. She is currently working as a TV and radio presenter.

Before getting into a relationship with Michael, she was dating footballer Martin Jiranek with whom her affair lasted for four years. Then she dated her new boyfriend Tomas Petera and later on, she started a romantic relationship with rally driver Stepan Vojtech.

Currently, Michael is living happily with his future wife/spouse Diana and two daughters.

The Famous NHL star is 6 feet 2 inch in height and weighs around 87 kilograms. Michael Frolík is not only a world-class athlete but also has a very attractive individual.

Michael Frolík was born on 17 February 1988, in Kladno, Czechoslovakia to father Stanislav Frolík but the details regarding mother and other family member aren't available.

As per his nationality, he is Czech and belongs to the White ethnic group and his star sign is Aquarius.

Michael Frolik started his professional NHL career after being drafted in the 2006 NHL Entry Draft by the Florida Panthers. In addition to this, he also played for several reputed teams like Chicago Blackhawks, Winnipeg Jets, and HC Kladno. 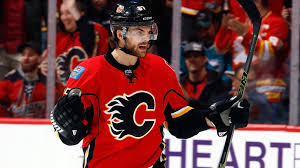 Currently, he is playing for the Calgary Flames alongside famous right winger Troy Brouwer of the Flames.