Michael Ballack was born on 26 September 1976, in Görlitz, East Germany to parents, Stephan Ballack and Karin Ballack. As per his nationality, he is German. Further, his star sign is Libra.

There is less information regarding Michael Ballack's educational background, where he studied and graduated from.

In 1995, Ballack earned his first professional contract. He made his professional debut on 4th August 1995 on the first day of the new 2. Bundesliga season. He made 16 appearances for FC Kaiserslautern during the season as the club became the first-ever newly promoted team to lift the Bundesliga title. In 1999, he moved to Bayer Leverkusen at age 22.

Ballack finished with a total of  17 league goals and his performance over the season led to him being voted into the UEFA.com users' Team of 2002 as well being named German Footballer of the Year. He signed with Bayern Munich in a 12.9 million euros deal in 2002. In the third season, Ballack enjoyed success in the 2004-05 season. He scored 61 goals in total in the Bundesliga. 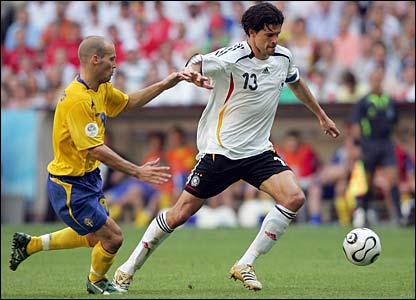 In 2006, Ballack joined English Premier League club, Chelsea. He played four seasons with the club and returned to his former club Bayer Leverkusen in 2010. He played two years for the club.

During Euro Cup 2012, the 2014 World Cup, and Euro Cup 2016, Ballack worked as a studio analyst for ESPN, often alongside Alexi Lalas.

Ballack married his long-time girlfriend, Simone Lambe on 14 July 2008. The couple has three children named Louis, Emilio, Jordi. However, the couple divorced in 2012.

As of current time, Ballack has been dating Lebanese Natacha Tannous since 2015. Their relationship is going on strong without no signs of separation.

Michael Ballack's Salary and Net Worth

As of 2018, Michael Ballack has an estimated net worth of over $30 million dollars. He had an average salary of $8 million dollars annually when he was playing football.

Michael Ballack so far has made earnings of $30 million dollars from his entire soccer career.

Other than being a retired football player, Michael Ballack is pretty famous in social media. He has 800k Instagram followers and 185k Twitter followers.

Facts and stats of Michael Ballack

Michael Ballack was not only a world-class athlete but also has a very attractive individual. He is 6 feet 2 inches in height and weighs around 85 kg.