Mayron George is a Costa Rican Footballer signed by a French Ligue 2 club Pau. Apart from that, George plays attack - Centre-Forward and represents a Jersey number 9 for his fellow club. Further, he is also the member of the Costa Rican national team since 2013. Additionally, the footballer has a current valuation of €200 thousand.

The Pau teammate, Mayron, is one of the potential and talented players who have fantastic playing skills that have never always left his fan. Wow. Similarly, Mayron has a mastery in the center forward of the ground. Additionally, he made his professional career debut in 2009.

Mayron Net Worth And Market Value

The Puerto Limon-born athlete, Mayron, has an estimated net worth of $ 1 million- $2 million. Similalry, he has been engaged in the vocation for long years and now so, this is pretty sure that, he must have collected the decent sum of money into this bank account.

Talking about his income sources, football is the foremost source of his income, and apart from this, he might be receiving endorsements and partnerships; however, the player doesn't like to talk about his earnings openly on web sources. In addition, Mayron's current market valuation is €200 Thousand playing for the club Pau FC. Moreover, the highest market value of the player was €500 thousand.

Despite his fame and popularity, the player has kept his lovelife from public reach. There are hundreds of questions regarding his lovelife; however, the precise information about his dating career remains undisclosed.

So, the close sources revealed that he is possibly single, and due to lack of information, Mayron's dating status is a mysterious topic for us. Likewise, he has never revealed his past lovelife so we couldn't say much about his past lovelife as well.

The talented footballer Mayron George has over ten years of experience in the vocation, so, beginning his career in 2009, he made his career debut by the club Limon. Before playing for the club, he played in local clubs as a youth.

So in 2014, he was loaned to the club, OF, where he played from 2014–15. After a year, he joined the club, Hobro and played for the Danish Superliga and Danish 1st Division representing the club.

One after another, the player got a chance for many clubs, including Randers, which he joined in 2016, and later, he was loaned to Lyngby. Apart from that, he was also part of a club, Midtjylland, where he set a record of four goals. Playing for the club, he was back-to-back loaned to Valerenga Budapest Honvéd, Kalmar, and Pau FC.

As we know, he has been a part of many football clubs where he has gathered experienced and fame. As per transfermarkt.com, Mayron had a contract with the club Pau on July 1, 2022; however, the contract expiration date is yet inaccessible.

Talking about his international career, the Mayron has represented his national team in the 2019 CONCACAF Gold Cup.

You may also prefer to read about, Keysher Fuller who is a pro-level Costarican football player.

Mayron was born on October 23, 1993, and his birth name is Mayron Antonio, George Clayton. For more information, he is famous for his birthname in his home country. More to this, his zodiac sign is Scorpio, and the player was brought up by his parents in Limon, Costa Rica. 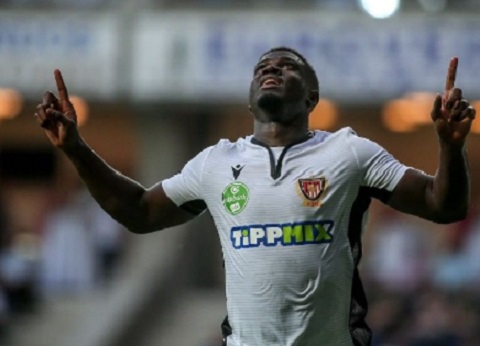 Mayron being a secret keeper hasn't shared any facts about his family including their names and identity. Due to this, we couldn't mention much information about them at the moment. Similarly, he hasn't dropped any facts regarding his siblings.