Maximiliano Falcon is a professional footballer from Uruguay who plays as a defender for the Chilean Primera Division club Colo-Colo. Since making his professional football debut in 2019, Falcon has already played in some teams and has helped them to win some championships too.

Furthermore, Falcon has played for the U20 team of Uruguay, and he is included in the team that is playing in the FIFA World Cup 2022. Being a part of the Colo-Colo team, he has already made a great contribution to helping the team to win some titles, including Copa Chile (1) in 2021.

Falcon Shares a Child With His Wife

Starting with his love life, Falcon is a happily married man who lives a blissful life with his wife, Florencia. The pair made their relationship official after sharing a photo on Instagram on August 30, 2020. And the twosome walked down the wedding aisle in October 2021. 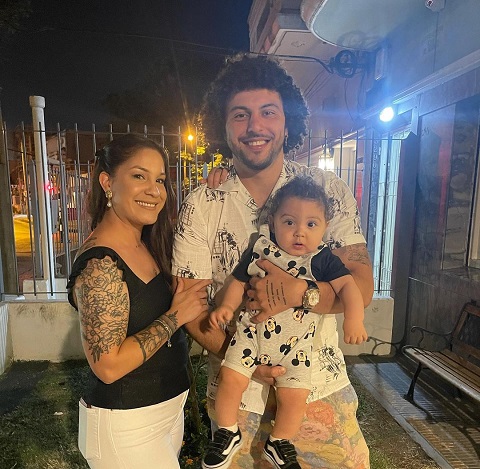 Maximiliano Falcon has a child with his wife  SOURCE: Instagram @maxi_falcon97

Since then, they are sharing the relationship of a wife and a husband. Before getting married, Falcon and his wife had already become parents. The footballer announced the happy news of his wife being pregnant in November 2020, and in March 2021, the pair became parents after welcoming a son.

The family of three lives together, and Falcon often posts images with his wife and child on his IG account, where he is available as @maxi_falcon97.

Earnings: Take a Look at His Salary & Net Worth

Falcon plays for Chilean Primera Division club Colo-Colo, and when he joined the team on October 30, 2020, he received a fee of €550Th. So, his salary may be decent, but the actual amount remains under review. For your information, Falcon's market value is €700Th while the highest value was €900Th on October 20, 2020.

So, the professional footballer may have preserved a considerable net worth from his profession. Falcon not only makes money from being a footballer but also from brand endorsements. His Instagram posts show that Falcon has worked with Adidas. In his spare time, Falcon loves visiting different places, and he has also shared some of those happy moments on his social media account.

Falcon began playing football after joining the youth team of Nacional. And in 2019, he joined Rentistas, making his professional debut on May 11, 2019, in a match against Cerrito. He made 32 game appearances for Rentistas and scored three goals. Since October 30, 2020, Falcon has been representing the Chilean Primera Division club Colo-Colo. Apart from being a major player in his club, he has also got a chance to play for the national team of Uruguay. He has appeared in five games while representing Uruguay U20 and has also scored a goal.

You May Read: Facundo Torres

Falcon Is a Native of Paysandu

Maximiliano Joel Falcon Picart was born to his parents in 1997. The footballer celebrates his birthday on May 1 every year. Besides, Falcon is a native of Paysandu, Uruguay, and he holds Uruguayan nationality. As Falcon is a private guy, he has not mentioned anything about his family background.

Regarding his physical appearance, Falcon is a tall guy who stands at the height of 5 feet 10 inches (1.79 m).