"Not every father gets a chance to start his son in his own footsteps." Maximilian Ibrahimovic, the son of veteran Swedish footballer, Zlatan Ibrahimovic trains with Manchester United academy. Yes, junior Ibrahimovic is paving his own way to football success. Football Gene!!

Zlatan Ibrahimovic has inked the names of his sons, Vincent and Maximilian, on his right arm. Scroll down to find out more interesting facts.

Maximilian Ibrahimovic is the first child of the world-renowned footballer, Zlatan Ibrahimovic, and Helena Seger, a Swedish businesswoman.

Maximilian was born on 22nd September 2006, under the star sign Virgo. As of 2022, he is fifteen years old. The name Maximilian is derived from the Latin word “Maximilianus,” which means “greatest.” 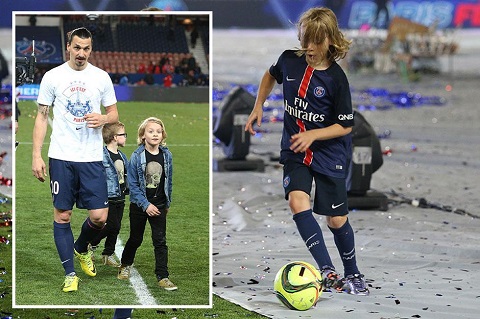 Back in 2017, The Sun reported Maximilian train in Manchers United Academy. Before, Maximilian and Vincent enrolled in Paris Saint-Germain's youth setup.

Zlatan Ibrahimovic, a Swedish striker is currently signed to the Series A side Ac Milan and internationally represents the Sweden national team. He has scored over 570 career goals, including more than 500 club goals in the last four decades. Overall, he has won 31 trophies.

Ibrahimovic began his career in the year 1999 with Malmo FF. Later two years, he signed for Ajax where he earned a reputation as one of the most promising forwards in Europe. Following two seasons, he joined Juventus and then Inter Milan in 2006.

Zlatan Ibrahimovic is together with Helena Segar for a long time now. Together, they have two children, sons Maximilian and Vincent.

They met for the first time in the year 2002, in a parking lot both of them bumped into their car.  Segar revealed, Ibrahimovic blocked her car off with his Ferrari. She recalled the incident while admitting neither of them is 'easy to live with'.

Born on 25th August 1970, Helena was 32 years old when she met Ibrahimovic who is 11 years younger. Despite the age, the duo has been able to maintain completely fit and stunning.

Talk of them getting married at some point was dismissed by the Segar. The Swede insisted she does not want to be defined by her relationship.

"I think I like Zlatan because I stand up to him, I too have an important background and I have built my career with a lot of sacrifices. Getting married could disturb my sense of independence. I don't want to be labeled simply as the wife of a player, or the winner of a beauty contest. I think people don't know how much I have studied, worked, and fought," Segar said.

Matter of fact, Maximilian Ibrahimovic lives low-key. He is not active on social media platforms such as Instagram & Twitter. Additionally, Zlatan is very concerned about his family so he does not post either.