Maverick Scott McNealy a.k.a. Maverick McNealy is an American golfer who turned professional in 2017. Before he joined the PGA Tour, he was playing for Korn Ferry Tour. A 2018 graduate of Stanford University with a degree in Management Science and Engineering, he was the number one ranked golfer in the World Amateur Golf Ranking in late 2016 and early 2017.

Portola Valley, California native, Maverick McNealy was born on 7th November 1995, under the star sign Scorpio. He is the son of mother Susan McNealy and father Scott G. McNealy, an American businessman who is most famous for co-founding the computer technology company Sun Microsystems. He has three siblings: Scout McNealy, Colt McNealy, and Dakota McNealy. He holds an American nationality and is of white ethnic background. The twenty-five years old stands 6 ft 1 in (1.85 m) and weighs 170 lb (77 kg).

How Much Is Maverick McNealy's Net Worth In 2021?

Along with a name and fame, Maverick McNeal has earned a good deal of money through his tennis career. His earnings to date are given below.

Soon after turning pro, he signed an equipment deal with Callaway. As of 2021, his net worth is over $2 million. On the other hand, his father, Scott McNealy's net worth is $1 billion.

Maverick McNealy's Girlfriend: Is He Dating?

Maverick McNealy is currently dating LPGA professional golfer Danielle Kang. The couple is in a relationship since 2019. Reportedly, they met at The Summit Club in Las Vegas, where they both live. 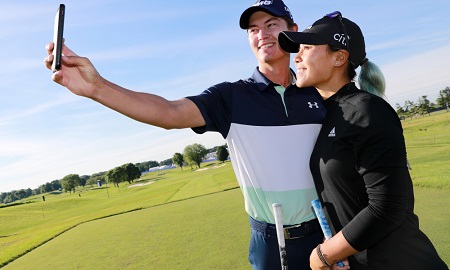 McNealy states being in an affair with someone who understands the lifestyle and stresses that professional golfers face is both helpful and grounding. Further, he added,  “I’m the luckiest guy ever.” The LPGA and PGA Tour pros, one of golf’s power couples.

Besides, Maverick is nowhere to be found on Instagram.

In August 2017, McNealy announced he would turn professional following the 2017 Walker Cup. In 2018, he made his professional premièreat the Safeway Open.

In 2018, McNealy played on the Web.com Tour. That season, he played in 18 tournaments, making the cut in 12, and finished 65th on the money list for 2018. His best finish was a tie for third at the United Leasing & Finance Championship.

For the 2018-19 season, Maverick failed to earn a PGA Tour card but was successful to receive full status on the Web.com Tour for the 2019 season. Finally, for 2019-20, McNealy earned his PGA Tour card, via his finish on the 2019 Korn Ferry Tour.