Mattia Caldara was born on May 5, 1994, in Bergamo, Italy. He is the son of Stefano Caldara and his wife. Mattia has not shared much about his parent's occupation and siblings in the media. In September 2018, Caldara enrolled in LUISS Sport Academy to earn a three-year bachelor's degree in economics and management. Talking about his physical appearance, Caldara stands six feet three inches tall and weighs 85 kg.

Mattia Caldara's Salary and Net Worth

Mattia Caldara has an estimated net worth of more than $10 Million. The player is living a lavish lifestyle through his successful football career. Mattia has an annual salary of £3,432,000 with AC Milan. He will receive the same amount until 2023. Caldara has a weekly wage of £66,000. Father of A Child

Yes, You read that right. Caldara is a proud father of a child. Mattia is engaged to his fiance, Nicole Nessi. The love birds have been dating each other for more than four years. Mattia first shared a photo of them in January 2018 from their visit to Spain. Nothing much about their first meeting experience is shared with the public. 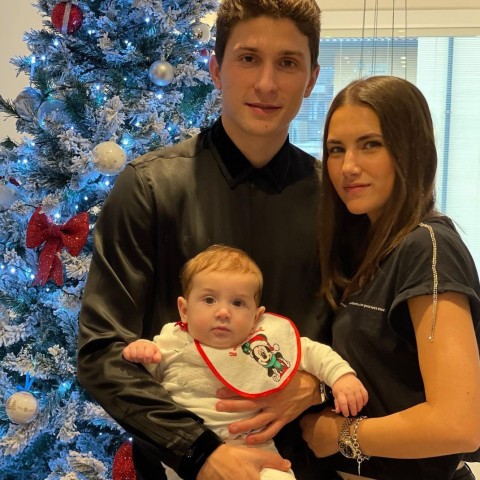 Mattia shares a photo with his fiance and son SOURCE: [email protected]

In April 2020, Mattia shared about expecting their first child together. The family of two extended to three with the birth of Alessandro in June 2020. They are living a happy married life.

In 2015, Mattia was laoned to Cesena for a season. The player had a good season and appeared in twenty-seven games. In early 2017, Caldara moved to Juventus and signed a four-and-a-half-year contract for an initial transfer fee of €15 million, rising to a potential €25 million with add-ons.

In August 2018, Mattia moved to AC Milan and signed a  five-year contract for €35 million, payable in two years. However, The player was loaned to Atalanta for the 2020 season and then to Venezia for the 2021 season.