Matthew Mayer is a rising American college basketball player. He is currently playing in the Big 12 Conference for the Baylor Bears. Mayer plays as a Shooting guard and Small Forward with his team. Matthew was part of the NCAA Championship winning team in 2021.

Matthew Mayer was born on September 23, 1999, in Austin, Texas. He is the son of John Mayer and his wife, Ellen Mayer. Much about his parent and sibling are still under the limelight. Mayer graduated from Westlake High School and enrolled at Baylor University. Talking about his physical appearance, Matthews stands six feet and nine inches tall and weighs 102 kg. 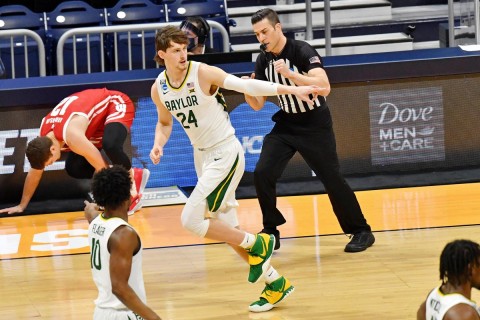 Matthew runs back after scoring a point in a game SOURCE: Daily Bears.

Matthew appeared in all thirty-three games in freshman year but had a very low average. In his three years with the team, Mayer has not started in a single game to date. The player improved his efficiency and became a key contributor off the bench for one of the top teams in the nation. His team won the 2021 NCAA championship title and averaged 8.1 points per game in the season.

Looking into the stats, Matthew will be playing in the league for his senior year and will list his name for the 2022 NBA draft. He will surely be among the best players from the university.

The Baylor University basketball player is very much private about his personal life. He has not shared a word about his girlfriend and love life in public. Following his timeline photos, we can be almost sure that Matthew is single as of late 2021. Mayer likes to spend his free time with his family and friends and can be found on the basketball court most of the time.

Mayer could secretly be dating someone. He might be waiting for the perfect time to share the news. Matthew is very much early in his career and must be focusing on making a good career.

Matthew has yet to start his professional career and currently does not possess any assets and net worth to his name. The average salary of an NBA rookie player is more than a million. Last season, First pick Cade Cunningham had an annual salary of $8,375,100 and Second pick Jalen Green's annual salary was $7,493,500.

As per the NCAA rules, the universities do not pay a penny to their athletes rather offer them scholarships to cover their expenses. He will be living a lavish lifestyle through a successful career.