Matthew Dean Calvert a.k.a. Matt Calvert is a Canadian professional ice hockey left winger currently playing for the Colorado Avalanche of the National Hockey League (NHL). He was picked in the fifth round, 127th overall, of the 2008 NHL Entry Draft by the Columbus Blue Jackets.

How Much Is Matt Calvert Net Worth In 2019? Know His Salary and Contract

As of 2019, Matt Calvert has an estimated net worth of $8 million. The significant source of his earning is his NHL career. His entire NHL career earning is recorded at $17,169,207.

Thank you to everyone who came out and supported the @MC_Shootout! We are extremely happy to present a cheque for $42176.18 to KidSport!!! This would not have been possible without the support of the many Westman businesses involved! #BrandonManitoba pic.twitter.com/P6XZwncjE8

Besides, Calvert is a charity person. He often organizes a fundraising program.

Matt Calvert Personal Life; Who is he Married to?

Calvert is married to his long-time girlfriend, Courtney Rae. The couple tied the knot after one year of engagement, on 4th Jul 2014. Nevertheless, the duo has maintained their love life in low key.

Beside Courtney Rae, there is no record of Calvert's past affairs or girlfriend.

As far as his social media presence is concerned, he is not fond of using social media. So far, he is not found in any social sites despite Twitter. He connects with his fans via Twitter, where he regularly updates his professional and personal life facts.

Matt Calvert was born on December 24, 1989, in Brandon, Manitoba, Canada. His star sign is Capricorn. As per nationality, he is a Canadian. However, he has not revealed any information about his parents, siblings, and academic background.

Calvert started his amateur hockey career with a brief stint for the Winkler Flyers of the Manitoba Junior Hockey League (MJHL), during which he accumulated 15 penalty minutes in his only game with the club.
In the 2008 NHL Draft, he was drafted by the Columbus Blue Jackets. 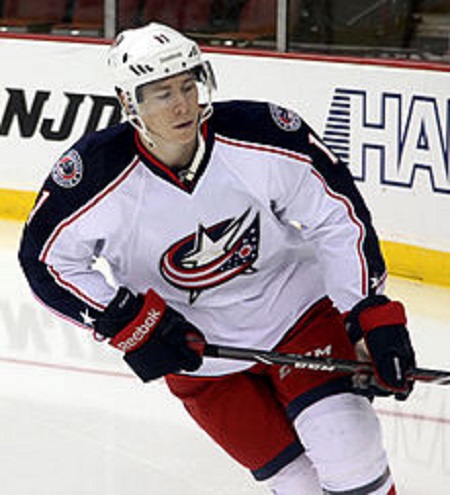 on January 6, 2011, and made his NHL debut two days later in a 6–0 loss to the Anaheim Ducks. One game then, he scored his first career NHL goal against goaltender Jonathan Quick of the Los Angeles Kings.

On February 25, 2011, Calvert scored a natural hat-trick for the Blue Jackets in a 5–3 win over the Phoenix Coyotes.

It was the first hat-trick of Calvert's NHL career and the 19th hat-trick in Blue Jackets history. On July 1, 2018, as a free agent, Calvert left the Blue Jackets after eight seasons to sign a three-year, $8.4 million contract with the Colorado Avalanche. His famous teammates include Nazem Kadri, Nikita Zadorov, and Vladislav Kamenev.