Mark Jerrold Henry, popularly celebrated as Mark Henry or Markswoggle, is an American professional wrestler, Olympic weightlifter, powerlifter, and strongman. He is currently signed to WWE as a producer.  He was a two-times Olympian, he has won gold, silver, and a bronze medal in weightlifting.

What is Mark Henry's Salary and net worth in 2021? Is he Married? Scroll down to know about his wife, children, family, and more.

Mark Henry was born as Mark Jerrold Henry on 12 June 1971, at Silsbee, Texas, the United States. He was born to American parents, Barbara Jean and Ernst Henry. He holds an American nationality and is of black ethnicity. He grew up together with his elder brother Pat. He is also the cousin of Kevin Henry, a former Pittsburgh Steelers defensive end. He attended  Silsbee High School.

Mark was into weightlifting since his childhood. In his freshman year at Silsbee High School, he was able to squat 270 kg which made him make a record of ‘the world’s strongest teenager” by Los Angeles Times. He was also a 3-time Texas State Champion with state and national records. He is also the U.S National Powerlifting Champion in 1995 and won the gold, silver, and bronze medals at Pan American Games. He has won numerous titles and awards for his extreme talent in this field.

Mark started his career in wrestling in 1996 where he competed against Jerry Lawler on a World Wrestling Federation ring. He is entitled to various nicknames such as ‘The Silverback’, ‘The King of the Jungle’, ‘The World’s Strongest Man’, and so on.

Mark was very close to his mother. His father died due to the complication of diabetes when he was 12. Later, at the age of 14, he himself was diagnosed with dyslexia. His mother supported him a lot throughout his childhood and career. Henry was devastated when his mother died.

Is Mark Henry Married? Who is his Wife?

Moving on to his personal life, Mark is a happily married man and has a beautiful spouse, Jana Henry. Though, it is not his first marriage. He was previously married to Jana Mckissick before. They got divorced in 1992 however; the reason for their separation is still a mystery.

Mark & Jana Mckissick had a son from their marriage named Jacob Henry. Apart from this, there is no any news about him having any past or current girlfriend or affairs. Mark & Jana Henry are also blessed with a beautiful baby girl named Joanna Henry. Currently, the couple and their children live together happily at Austin, Texas. 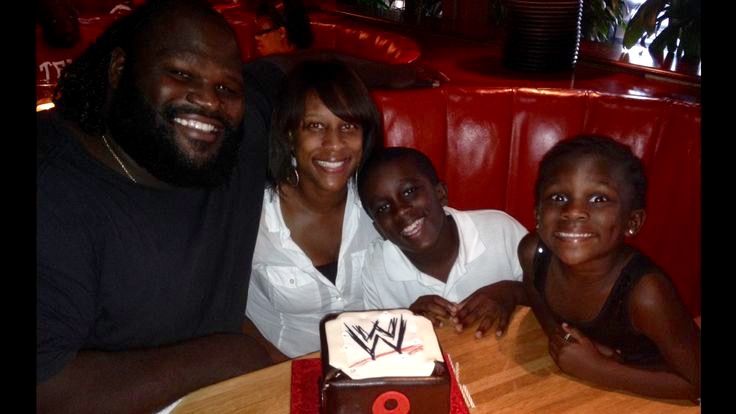 Mark Henry with his wife and children SOURCE: Pinterest

He has an amazing height of 6 ft. 3 inches with a bodyweight of 190 kg. To know more about Mark Henry, he can be followed on different social networking sites like Facebook, Twitter, Instagram, and Wikipedia. Besides, there are different sites that provide a brief bio on him.

The 46 years, also nicknamed as the world's strongest man, Mark Henry had a net worth of $4.5 million in 2016. As of 2021, he has an estimated net worth of $5 million including all of his properties and earnings. Maximum of his net worth is build through his career as a wrestler. He is currently receiving an annual average salary of $900,000, from WWE.

There are no any rumors and controversies about Mark Henry. He was a very gentle and problem-free man. Though there are various brands used by Mark, there is no particular brand preferred or used by him. He can be seen engaged in various charity games and events.