Mario Pasalic is a Croatian professional footballer signed by the Serie A side Atalanta as a central midfielder. A full international since 2014, he has earned 42 caps with seven goals for the Croatia National Team.

Though born in Mainz, Germany, Pasalic grew up in Kastel, Dominica. His mother is from Vrlika, a small town in inland Split-Dalmatia County, Croatia, and his father hails from  Sarajlije near Tomislavgrad, a Bosnia Croat. His uncle, Ivan Krstanovic, is a footballer who plays in the Croatian First Football League for Slaven Belupo.

How Much Is Mario Pasalic's Net Worth?

His current market value is €23 million. His net worth is $5 million.

Mario Pasalic is married to his long-term girlfriend, Marija Grbesa. 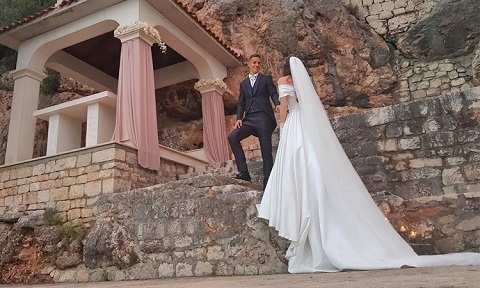 Pasalic tied the knot with Grbesa in the church of Ciovo, and the guests were then moved to a sailboat, where they celebrated long into the night. The duo welcomed their first child, Luka Pasalic, in February 2022.

On April 14, 2013, Pasalic made his professional debut for Hajduk Split, replacing Ivan Vukovic in the 90th minute of a 2–1 home win over Cibalia. In 2013, Pasalic agreed on a four-year contract with Hajduk. That season (2013-14), he made 36 appearances in all competitions.

On July 9, 2014, Pasalic signed with Chelsea. He said,  "I am very happy because I am now a Chelsea player." For the 2014-15 season, Chelsea sends Pasalic on loan to Elche. He played 31 games and scored three goals for Elche.

On August 27, 2016, Pasalic signed a season-long loan deal with Milan. On August 2 2017, he signed a new four-year contract with Chelsea and was again sent on loan to Spartak Moscow for the 2017-18 season.

On July 25, 2018, Pasalic moved to the Italian side of Atalanta for a season-long loan deal with an option to buy by the end of the deal. That season, Atlanta finished third in Serie A, qualifying for the following year's Champions League.

On July 4, 2019, Chelsea signed Pasalic on a new contract until 2022 and returned to Atalanta on loan for a second season. On September 18, 2019, Atlanta played their first Championship League. On December 2, 2019, Atalanta negotiated a €15 million option to buy to be activated at the end of the season.

In December 2020, Pasalic had sports hernia surgery, keeping him on the disabled list for over two months. He made his comeback in a 3–1 defeat to Lazio, in which he scored Atalanta's only goal.

On May 14, 2014, Pasalic was named for the 2014 World Cup, however, he did not make it to the final squad. On September 4, 2014, he made his international debut, replacing Mario Mandzukic in a friendly home win against Cyprus.

Again, he was named to the 2018 World Cup in Russia but did not make the final 23.
On October 7, 2020, he scored an international goal for Croatia in a friendly 2–1 victory over Switzerland.