Marine Lloris is a Business owner and celebrity family member who launched a children clothing line called Manege en Sucre. She is married to French international footballer, Hugi Lloris who plays for Tottenham Hotspur and France national team. The beautiful couple is blessed with two daughters named Anna-Rose and Giuliana.

Marine Lloris was born on 7th August 1986 in France. Her birth sign is Leo. By nationality, the beautiful lady is French, and her ethnicity is Caucasian white.

Lloris has degrees in both human resources and law.

Marine Lloris's Net Worth and Endorsement

Currently, Marine and her family (Husband and two Daughters) reside in a luxurious mansion in Hampstead, North London which is estimated to be worth $7.97 million. As Marine is fully engaged in her clothing company, she generates a decent amount from there. However, she has not revealed her exact figure of Net worth.

Her Husband, Hugo Lloris who is a three-time winner of the UNFP Ligue 1 Goalkeeper of the year award, has an estimated net worth about $30 million and earns $5.36 million per annum as his salary through his present club, Tottenham Hotspur.

The company was launched in June 2016 with the idea to design and sell quality products. The clothes are designed in London where she currently resides.

Marine and Hugo Lloris were in a long-term relationship and met each other on the school benches of Nice in 2002. After dating almost eight years, they welcomed their first baby girl named Anna Rose Lloris in 2010.

Happy Birthday my everything! You are such a beautiful and funny little girl. We can't be more proud of you. We love you so much ! #7 #birthdaygirl #specialday #unconditionallove

The duo tied the knot on 6th July 2012, in Nice in front of the mayor, Christian Estrosi and was surrounded only by their families. The wedding was officiated by Deputy Mayor of Nice Christian Estrosi.

In 2014, the couple became a proud parent for the second time following the birth of their second baby girl, Giuliana Lloris.

Loris is active in Instagram with 80.2 k followers. She often shares adorable pictures with her loved one.

These days, Marine is regularly spotted on the sidelines either at White Hart Lane during the Premier League, or whenever France is scheduled. 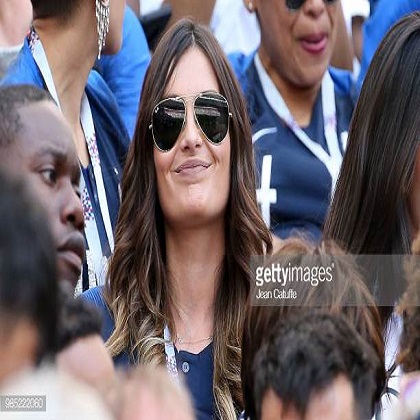 Meanwhile, her footballer husband plays as a goalkeeper for Tottenham Hotspur and captain for the French National team.  Currently, Hugo has been representing the France National Team in 2018 World Cup in Russia with his teammates Benjamin Pavard, Lucas Hernandez, and Antoine Griezmann.