A French international footballer, Benjamin Pavard currently plays in Bundesliga for Bayern Munich as a defender, wearing the jersey No. 5. Also, the young talent has represented his national side, France National Team in both junior and senior level, playing at the various tournament and won the 2018 FIFA World Cup.

As of 2018, his net worth is approximately $2 million. Regarding his love life, Pavard is currently dating 2007 Miss Frace, Rachel Legrain-Trapani. He has an endorsement deal with Adidas and can be seen promoting the brand quite often on his Instagram.

Has a Net Worth of $2 million

Benjamin who rose to the fame after scoring a stunning goal in the 2018 Fifa world cup has a net worth over $2 million. The prominent footballer, Pavard was previously signed to VfB Stuttgart where he received $23,313 as his weekly salary that is $1.2 million annually. His market value is recorded at $34.15 million.

Apart from his club career, Pavard adds the good sum to his bank account through a salary from the national team, sponsorship, and endorsement deals with various brands including Adidas. He can regularly be seen promoting the brand on his Instagram.

As of 2018, Pavard's actual net worth is unknown but we assumed it to be about $2 million. The amount is soon believed to get the net height as he has been included in the French squad for the 2018 World Cup in young age.

Previously in a Relationship with Miss France 2007, Rachel Legrain-Trapani

Benjamin Pavard, 22, is neither married nor have a girlfriend; however, he was in a romantic relationship with Miss France 2007, Rachel Legrain-Trapani. Additionally, Pavard used to share the day activity holding a hand and tagged the model in the photo. Rachel also shared a bouquet of flowers and wrote that it was given by the French defender.

Rachel also told that she would love to come to Russia to watch his game. Some of her comments in the Stuttgart defender also cleared the doubt that the two are actually dating. 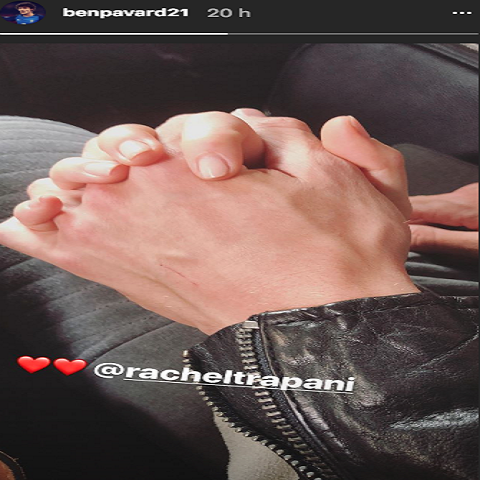 The comments go like: "In love... Benjamin Pavard", or "In love with Benjamin Pavard". Pavard often used to share the photo of the couple on Instagram where he was seen kissing his girlfriend. Unfortunately, the couple is no longer together and currently, his ex-girlfriend is in a relationship the man named, Valentin Leonard who is model by profession.

Furthermore, his former partner, Rachel, is the daughter of Italian immigrants was born on August 31, 1988, in Saint-Saulve. She graduated from the Lycée Henri-Martin with honors in 2006. That same year, at the age of 18, Rachel was crowned Miss Picardie, and Miss France the following year.

Rachel who is also a TV and radio host made her acting debut on Karim Hachemi ‘s 2011 film Quinte Flush.

However, Pavard is not only the love of her life. Before Pavard, she was in a relationship with Olympic hurdler Ladji Doucoure. The couple separated after two years of romantic relationship in 2009.

She later tied the knot with French soccer player Aurelien Capoue on June 8, 2013. ; who is the father of her son Gianni. They divorced in 2016. In May 2018, Rachel and Benjamin Pavard officialized their relationship.

Benjamin Pavard is a native of Maubeuge, France, born on 28th of March 1996 with the star sign is Aries. Pavard is a French national and belongs to white Caucasian ethnicity.

At the tender age of six, Pavard started off playing football with the youth team of US Jeumont. He enjoyed three years spell with Jeumont and then switched to Lille in 2005.

Academy product of Lille, Benjamin Pavard was promoted to Lille B in 2014, after spending a decade in the club’s youth system.

On 31st January 2015, Pavard made his Ligue 1 debut against FC Nantes, playing the full game in a 1-1 draw away. His second appearance for the club came on 15th March of the same year in a 3-0 home victory over Stade Rennais.

On 20th December 2017, he signed an extension contract with Stuugart, which would last until June 2021.

On 6th November 2017, Pavard was named for the friendly matches against Wales and Germany by France’s head coach Didier Deschamps. Four days later, he made his international team debut against Wales.

On 17th May 2018, he was called up to the 23 man squad along with his teammates, Hugo Lloris, Paul Pogba, and Antoine Griezmann, etc for the 2018 World Cup in Russia and won the 2018 FIFA World cup too. He was a key member of the team.

As of 2018 December, Pavard has capped 18 times with a goal for his national side.