Some people come to the limelight after years of hard work, but some rise to fame after their children become successful. Marie Okudah is one of those proud parents. She is the late mother of an American football cornerback for the National Football League's Detroit Lions, Jeff Okudah.

Marie Okudah was born in the 1960s in Nigeria. There is not much precise information about her parents and her siblings in the media. Marie fled to the United States in the 1990s along with her husband and then. Marie lived in Texas after moving to the states.

Marie Okudah left this beautiful earth leaving back memories to her children on January 14, 2017, in Texas. Marie lost the battle against cancer and passed away. She had been battling with it for more than two years. She passed away while her family members surrounded her, but her only son, Jeff, could be there with her in her last days. He had just left for Ohio State.

Her son, Jeff, was enrolled at Ohio State University and had left for his study. In 2020, Okudah became one of the highest cornerback taken in the modern draft era. In an Interview, Jeff shared that his mother didn't really understand football like that just being born in Nigeria, but she knew what made him happy.

Marie was married to Sam Okudah for more than three decades before passing away. The love birds tied their wedding knot in the 1990s. Soon after their wedding, They were blessed with a daughter, Karen Okudah and then in 1999, and The pair welcomed Jeff to their family. 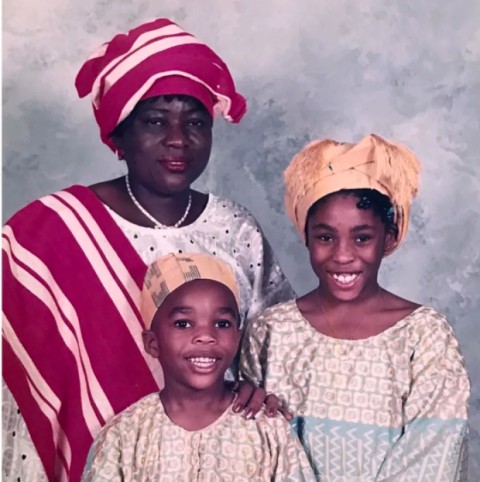 The family photo of Marie SOURCE: The player's Tribune

The family of four lived a happy life. Her daughter, Karen, is a youth counsellor at Destinations for Teens in Woodlands, California. Jeff is currently playing in the NFL for Detroit Lions.

Net Worth of Jeff Okudah

Jeff Okudah has an estimated net worth of more than $5 Million. He has earned his money through his contracts with the NFL. He signed his four-year rookie contract with the team on July 13, 2020. His guaranteed contract is worth $33.528 million and includes a $21.944 million signing bonus. On average, He will be earning $8.3 Million annually.

Jeff has a base salary of $600,000 and has a signing bonus of $5.4 million. He is very much early in his career. He shall be earning much more in the days to come. Ashtyn Davis is another rising American Football player with a net worth of $1 Million.

Jeff started playing football from the very age of seven. Jeff was a five-star recruit to Ohio State University in 2017. In his final year,  he was unanimously named to the 2019 College Football All-America Team and was also named a finalist for the Jim Thorpe Award. Talking about his physical appearance, Jeff stands six feet and one inch tall and weighs 93kgs.