Ashtyn Davis is an American football safety and return specialist currently signed to the New York Jets of the National Football League (NFL). He finished his collegiate career at California and was selected by the Jets in the 3rd round of the 20202 NFL Draft.

Santa Cruz, California native, Ashtyn Davis was born on 10th October 1996, under the star sign Libra. The twenty-four years hold an American nationality and is of white ethnic background. Regarding his physique, he stands 6 ft 1 in (1.85 m) tall and weighs 202 lb (92 kg).

How Much Is Ashtyn Davis's Net Worth In 2020? Salary & Contract 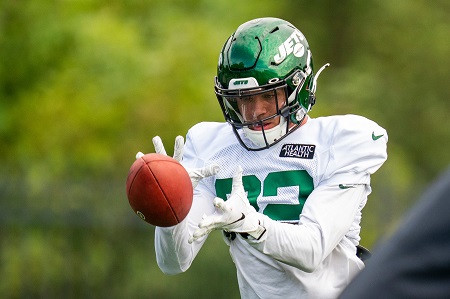 Looking at his contract and annual salary, Davis's net worth in 2020 is estimated at $1 million. Besides, there is much information available regarding his financial aspects.

From Santa Cruz High School To The University Of California, Berkeley To NFL

Davis enrolled at the Santa Cruz High School where he played wide receiver who joined the school's track team at the recommendation of his quarterback in order to become a faster football player. Though he was lightly recruited as a football player, he later received much interest from college track coaches.

Originally, he joined California's track and field team as a walk-on and only joined the football team after a tryout in the spring of his freshman year. In 2018, he earned First-team ll-Pack-12 and Second-team All-Pack the following season.

In the 2020 NFL Draft, he was picked by the New York Jets with the 68th overall selection. The Jets previously traded Leonard Williams to the Jets.

Ashtyn Davis was born to Roy Davis, who served overseas in the U.S. Navy, played semi-pro football, and Christine. Ashtyn has a younger sister Lexi.

Ashtyn said, “As an eight-year-old boy, my great-grandfather Henry Alston Davis escaped slavery in the Carolinas and made his way north to freedom in North Brunswick, New Jersey. Two-generation later his father was born.

It is still unknown if no. 32 – New York Jets' safety, Ashtyn Davis is married or in a relationship or single.  Nowadays IG and Facebook have been the platform to show off their loved ones, but, Davis is far away from these. He only shares professional stuff on his IG. To date, there are no records of Davis's past affair or girlfriend. Seems like the hunk prefers his personal life private.