Maria Stepanova is a Russian former professional basketball player who played in the WNBA for the Phoenix Mercury. She also played basketball at the Olympics, representing Russia. She was drafted 8th overall in the 1998 WNBA Draft.

A native of Stavropol, Russia, Maria Stepanova, was born on February 23, 1979, under the star sign of  Pisces. She stands 6 ft 8 in tall and has a weight of 85 kg. She was drafted in the round one in the 8th pick by the Phoenix Mercury at the 1998 WNBA draft.

Maria Stepanova Net Worth and Earnings

Besides salary, other perks for being a professional player are many. A professional basketball player also makes money from their endorsement deals, sponsorships, promotions, and businesses. Likewise, she might even have earned money from such contracts. However, her net worth is still under evaluation.

Relationship Status: Who is Maria Married to?

The 40-year old Maria Stepanova is already a married player. She got married to Denis Zubov in 2003. The couple dated each other for a couple of years and engaged in 2002.

Her husband Denis is a former water polo player. Her husband's height is 6 ft 3 in and is shorter than Maria's. Together they have five sons. Her elder son plays football, and other sons are still young.

The tall giant Maria Stepanova is cherishing her life with her sons and husband. She is seen posting photos of her family on her Instagram page. Maria's elder son Nicolas, who was born before their marriage in January 2003, has the same height as her.

Who is Maria Stepanova? Height and Measurements

Maria Alexandrovna Stepanova was born on February 23, 1979, in the village of Shpakovskoye and grew up in Tosno, Leningrad Oblast, Russia.

In the 1998 draft, Stepanova was chosen 8th in round 1 by the Phoenix Mercury. Stepanova played for the Phoenix Mercury during 1998-2001, 2005. Some of the highlights of Maria Stepanova’s career include 3× FIBA Europe Women’s Player of the Year, and 3× Russian Gold Basket awards. 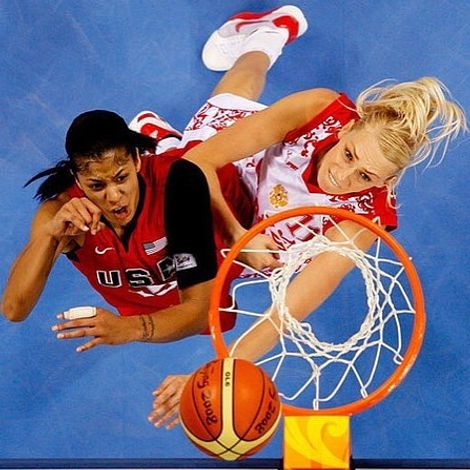 Maria dunks the ball during a match SOURCE: Instagram @stepanovama