Marcus Zegarowski is an American college basketball player who is enrolled at Creighton University and playing for its Creighton Bluejays of the Big East Conference. In 2020, he won second-team All-Big East and Big East All-Freshman Team the previous year.

How Much Is Zegarowski's Net Worth?

A matter of fact, there is no such policy of salary to college athletes. Hence, Marcus earns nothing but name playing for his college team, Creighton Bluejays. Meanwhile, NCCA's Board of Governors announced it supports allowing "student-athletes to receive compensation for third-party endorsements both related to and separate from athletics."

Not to mention, the ultimate goal of every athlete is playing in the NBA. If Marcus goes draft in the future, surely, he will earn millions in the future. The average player salary is roughly $7 million, according to Basketball-Reference.

Marcus Zegarowski was born to Amanda Carter-Zegarowski, a former college basketball player and now coach, and Zach Zegarowski, who played basketball at UMass Lowell and was an assistant coach at Charlestown High School. Not only his parents but his whole family plays basketball. Actually, he comes from one of the most popular NBA families. 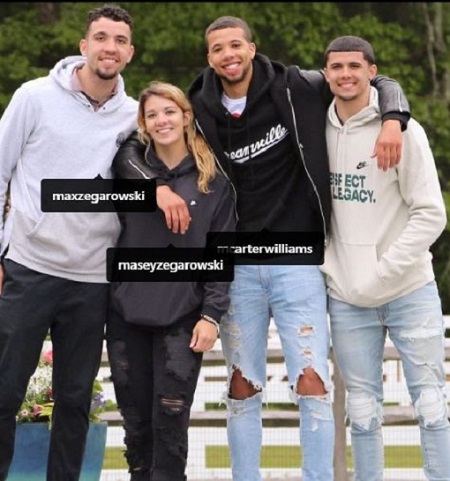 His elder brother (step), Michael Carter-Williams plays for the Orlando Magic of the NBA. Similarly, elder sister, Masey, plays NCAA Division I basketball for Bryant and his twin brother, Max, plays for the Franklin Pierce University of Division II.

Marcus finished his freshman season at Hamilton-Wenham where he averaged 20 points per game. Along with his twin brother Max, they were transferred to Tilton School in New Hampshire for their sophomore season. During his senior season, Marcus was named NEPSAC AA player of the year and scored a career-high 57 points in a 118–116 double-overtime win over the South Kent School.

Over offers from Washingtons, Minnesota, and Ohio State, he committed to Creighton Bluejays men's basketball. During his freshman year, he was starting point guard and averaged 10.4 points, 3.4 assists, and 3.2 rebounds per game. As a sophomore, he averaged 16.1 points and 5.0 rebounds per game. Coming into his junior season, he earned Preseason Big East Player of the Year.

Noting is made public regarding Marcus's personal life. To date, there is news and rumors popped out on media sites regarding the point guard being romantically involved with someone. Furthermore, Marcus himself has not featured any picture with a lady on his official socials who we could assume to be his potential girlfriend.

In short, the basketball player is a low key person. There is no speculation regarding his relationship status.