Marcos Giron was born on July 24, 1993, in Thousand Oaks, California. He is among the two children born to Rosanna Giron and her husband, Andres Giron. He has an older sister named Gabriela Giron. After graduating from High School, Giron enrolled at the University of California, Los Angeles, and played tennis. Marcos stands five feet and eleven inches tall and weighs 77 kg.

Marcos Giron's Net Worth and Earnings

Marcos Giron has an estimated net worth of more than $1 Million. He is very much early in his career and shall be making millions in the future. Giron has already made $347,699 from single and $10,309 in the ongoing season of 2021. Last season, The American tennis player earned $436,338 from eighteen events. Marcos has a sponsorship deal with Yonex and must be making a handsome amount through his deals. 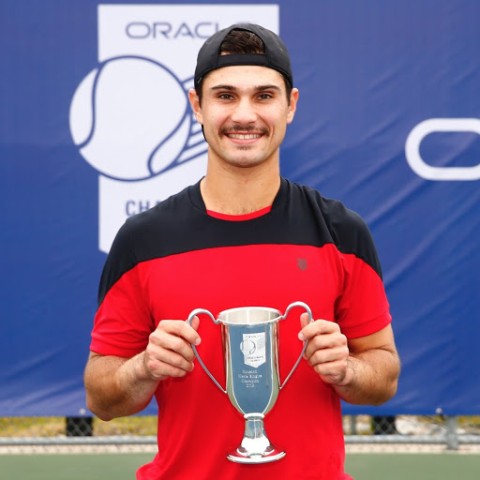 Marcos along with his Challenger Tour Title SOURCE: Tennis Forecast

Marcos is an active social media user. His timeline is filled with his photos of games, vacations, family, and friends. Giron is very much private about his personal life and his relationship. He was believed to be living a single happy life, but in June 2020, In an interview, Marcos opened about living in a relationship with his girlfriend, Becca. He has not shared a word about his girlfriend since then. Marcos and Becca must be planning to get engaged or tie their wedding knot soon.

Marcos started playing tennis at the age of five. He played tennis for his High School team. He won the NCAA Division I Men's Tennis Championship while studying for UCLA. Giron turned professional right after graduating from UCLA. Marcos won the men's singles in the Ojai Tennis Tournament in 2011 as an amateur.

Marcos won his first Challenger Futures singles title in September 2013. He played in the US Open in 2014 and reached round one. The same year, Marcos reached the quarterfinals at the Indian Wells Masters. Giron is yet to register a win at a major event and won his last Challenger Tour title in the Oracle Challenger Series.