Marco Silvestri was born on March 2, 1991, in Castelnovo ne' Monti, Italy. He has kept his personal life away from the media. Talking about his physical appearance, Silvestri stands six feet three inches tall and weighs 85 kg.

Marco Silvestri has an estimated net worth of more than $2 Million. The player credits most of his net worth through his successful football career. Silvestri must be making a reasonable sum from his sponsorship and advertising deals. As per sources, Marco received an annual salary of €462,800 while playing with Verona. He had a weekly wage of €8,900 and was the highest-paid goalkeeper for the team. Marco has an annual salary of £728,000 with Udinese and a weekly wage of £14,000. He will receive the same pay until his contract expires in 2024. Silvestri is very early in his career and will be making millions in the future.

Marco is a married man living a happy married life and his wife and children. Silvestri exchanged his wedding vows along with Sofia Jamal Eddine in early 2014. They had a private wedding ceremony before their parents and their close friends. The couple had been dating each other for several years before their marriage. Marco and Sofia welcomed their first child, Chloe, in May 2015. 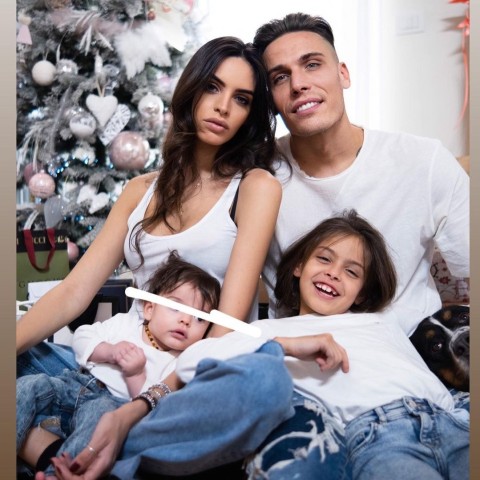 Marco shares a photo of his wife and children SOURCE: [email protected]_solvestrigk

Marco shared about expecting their second child in early 2021. The family of three extended to four with the second child, Liam Ziad, in July 2021.

Marco started training with Modena's Youth team in 2009. He played with several youth clubs before moving to Chievo on a loan season in his youth career. In August 2010, The player signed his first professional contract with the option to purchase half of his registration rights. The following year, Chievo allowed signing Silvestri in a co-ownership deal for €300,000.

Marco was loaned to Reggianna for the 2011/12 season. He became a regular goalkeeper and appeared in twenty-seven games for the club. Silvestri was loaned to Padova the following year than Cagliari for the 2014 season. However, The player left Chievo for a fee of €1 million and signed a four-year contract with English club Leeds United.

In the next three years, Marco appeared in eighty-eight games. He returned to Italy and signed with Hellas Verona for an undisclosed fee. In early 2021, The player moved to Udinese and has appeared in fifteen games.

Marco made his international debut in 2009, playing with the Italy U20 team. He appeared in five games and then called for the U21 team in 2011. Silvestri has not got a chance to represent the senior team.