If you love watching football, then Marcel Sabitzer must not be a new name. Marcel is a well-established Austrian professional football player. He has been playing in the professional league for more than ten years. Sabitzer currently plays with the Austrian Bundesliga for RB Leipzig along with Konrad Laimer.

Marcel Sabitzer was born on March 17, 1994, in Wels, Upper Austria, Austria. He is the son of Herfried Sabitzer and his wife. His father is a retired Austrian football player. Marcel stands five feet and ten inches tall and weighs 76 kg.

Marcel started playing football along with his father from a very early age. Sabitzer credits his father to begin his career in football. He joined Admira Villach's youth team and trained with them for a year. The Following year, Marcel moved to Grazer, AK. He spent most of his childhood with the club's youth team until 2008.

Marcel moved to Austria Wien and played with its youth team for a year before moving to Admira Wacker in 2009 and making his debut in 2010 with Admire Wacker's senior squad. In the next three seasons, He played in forty games for the Admira Wacker II and another forty-five games for Admira Wackers. In 2013, Marcel moved to Rapid Wien for a season. On 30 May 2014, Sabitzer signed a four-year contract with RB Leipzig and was loaned a season to FC Red Bull Salzburg.

Marcel played for a season with FC Red Bull Salzburg and appeared in thirty-three games scoring nineteen goals. Sabitzer returned to RB Leipzig for the 2015–16 season, scoring eight goals in 34 appearances. His contract was due to expire in April 2016, but he extended his contract until 2021. In 2020, He scored twice against Tottenham Hotspur and a place in the competition's quarter-finals for the first time in the club's history.

Marcel has been playing with the Austrian national team along with Marko Arnautovic. He played for the U16 Austrian team in 2009 and played in seven matches. The Austrian player played in numerous divisions before making his debut for Austria on June 5, 2012. Since 2012, Sabitzer has played in fifty games and scored eight goals for the national team. There have been rumors of Marcel moving to the Premier League in the 2022 season.

Marcel is engaged to his longtime girlfriend, Katja Kuhne, for more than a year. The duo got engaged in January 2021 in the Maldives. The Austrian football player shared his engagement through his Instagram with a stunning picture of their engagement ring. 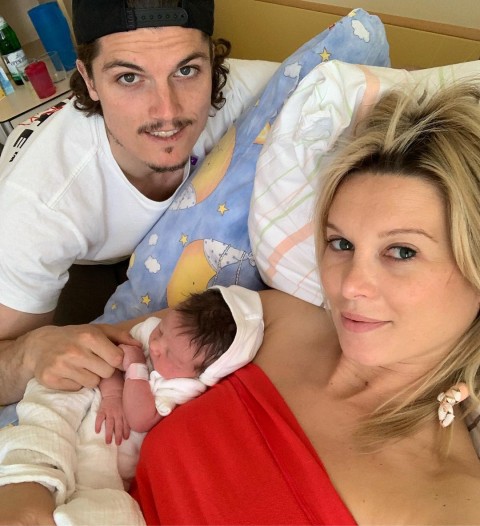 Marcel along with his fiance and their daughter SOURCE: [email protected]

In January 2019, Marcel opened about expecting a baby with his girlfriend. In April 2019, The duo welcomed their first child, a daughter Mary-Lou. They had been dating for more than four years before getting engaged in 2021. Katja is a well-known model and an actress. She rose to fame starring in the German version of the reality TV show, The Bachelor.

Salary, Contract, and Net Worth

Marcel Sabitzer has an estimated net worth of more than $20 Million. He has accumulated most of his net worth through his salary, Sponsorship deal, and bonus amounts from football. Marcel has been making more than €5.25 million as his salary with Leipzig. Therefore, he is one of the highest-paid players for the team.