Marc Guehi is an Ivory Coast-born English Professional footballer playing for the English Premier League club Crystal Palace and the England national team as a center-back. The Chelsea youth system product Guehi is also a former player of Swansea City. Moreover, He was just five years old when he joined Cray Wanderers in 2005.

Marc Guehi is the England youth international who won FIFA U17 World Cup in 2016 and UEFA European Championships as a runner-up in 2017. He initially represented England at the U16 level in 2015; since then, he has played at different levels. However, his senior England team debut game came on 26 March 2020 in a match against Switzerland.

Marc Guehi is also known by the family name Addji Keaninkin Marc-Israel Guehi. He was born in Abidjan, Ivory Coast, on 13 July 2000 under the Cancer Sun sign. He just turned 22 last July. The footballer is 6 feet tall and weighs 82 kg. Despite being born on Ivory Coast, he holds an England citizenship card. His parents migrated to London in 2002 when he was about one year old. Later on, they got the England citizenship card. To be noted, his parents are of Ivory Coast roots. Hence, we can express he is eligible to get both countries' nationality.

His family members' name remains under review as he has never spoken about them. Regardless, his father was a minister in a local Church. Besides this, there are no details on his family.

The 6 feet tall centre-back, Marc played his youth level for Cray Wanderers and Chelsea from 2005 to 2019. After appearing for twelve years, Marc began his senior professional soccer with the Chelsea first team by signing for two years. Nevertheless, he didn't play a single match. Thereupon, he joined Swansea City in January 2019 and made his Premier League debut in January. 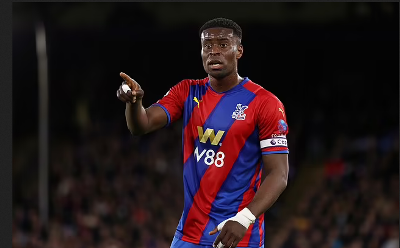 Playing in 40 matches, Marc joined the fellow club Crystal Palace for five years in 2021. So far, the English nationality has played in 42 games, adding two goals for the Palace.

The 22-year-old defender has kept his life low profile. Consequently, it is very challenging to know about his love life at the moment. Due to his introverted nature, most people are unfamiliar with his dating life. Also, there are no buzzes of him anywhere. We conclude he is probably single currently. He seems too busy with his profession, and as a result, he has no time for dating.

Financial Incentives and Net Worth

At the early age of 22, he earns millions from his profession. Because of his utter discipline and commitment to football, he has the best starting on his soccer journey. He is competing in the world's best league Premier League which is every footballer's goal. Undoubtedly, he is one of the wealthiest rising footballers who still yet to credit millions into his bank balance.

The FIFA U7 WorldCup Winner Marc signed five years contract worth £13,050,000 with the Palace. Marc gets an average yearly wage of £2,620,000 from Crystal Palace. His net worth is approximately $5 million. Besides that, he has been cooperating with various brands and products, which also nets a fair sum of fortunes into his bank balance. Marc's present market value is €32 million, and Unique Sports Group is his agent.