An American renowned basketball player, Malik Ahmed Monk is widely recognized as Malik Monk who currently plays for the Charlotte Hornets of the National Basketball Association. He played college basketball for the University of Kentucky, only for a year.

Most recently, Malik Monk was suspended indefinitely for violating the NBA Anti-Drug Policy on 26th February 2020. This suspension could cost him at least $27,000 per game.

Malik Monk's Net Worth and Endorsement

Back in 2017, Monk purchased a $7.3 million 2,050-sq-ft residence on Southwest River stone Road from Dream Structure LLC, led by Teresa and Steve Fisher. 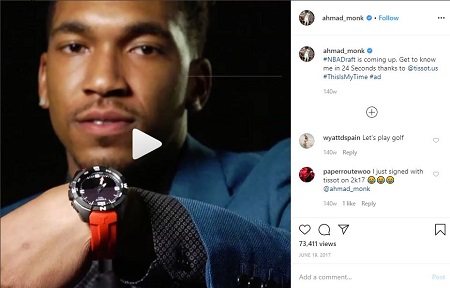 Monk, who is six feet three inches tall and 91 kg, is currently twenty-two years old. At this age, he is possibly single and unmarried. Monk actively surfs social media sites such as Facebook, Instagram, and Twitter but has not posted any photos which hint regarding his love life and possible girlfriend.

It seems that Monk is much focused on his basketball career rather than anything.

Malik Monk was born on 4th of February 1998, in Jonesboro, Arkansas. His birth sign is Aquarius. Regarding his nationality, Monk is an American and belongs to African ethnicity. He was raised alongside his brother Marcus Monk, a former Arkansas All-Sec wide receiver.

Mont enrolled at East Poinsett County High School in Lepanto, Arkansas. During his freshman year, he recorded 22.8 points, 2.7 assists with 4.6 rebounds per game while leading the team to a 25-8 overall and an appearance in the Class 2A state championship game.

Later he was transferred to Bentonville High School. In his junior year, he amassed 26.6 points per game. During his basketball career at Bentonville Monk competed for the “Amateur Athletic Union” and “2015 Nike Global Challenge”.

As a senior, Monk totaled 28.6 points, 4.4 assist and 7.6 rebounds per game. On 11th March 2016, he made his final high school game appearance where he scored 19 points against Cabot High School in a 59-49 loss in the 7A state championship.

On 18th November 2015, Monk announced that he would be joining the University of Kentucky via Twitter. As a freshman, he recorded 47 points in a victory over the University of North Carolina on 17th December 2017.

12 days later, Monk made his appearance against Ole Miss where he scored 34 points on five for seven points shooting in a 99-76 win.

At the end of his freshman year, he announced that he would waive his final 3 years of university eligibility and enter the 2017 NBA draft where he was anticipated as a first-round selection.