Malik Hooker is a rising American Football player currently playing for Indianapolis in the National Football League. Malik started playing in the NFL after Ohio State picked him with the 15th overall pick in the 2017 NFL Draft. He was named a First Team All-American and won the 2015 CFP national championship.

Malik Hooker was born on April 2, 1996, in New Castle, Pennsylvania. He is among the five children born to Angela Dennis and her husband, Jermaine Hooker. Malik's brother Marcus is also an American football player. Hooker graduated from New Castel High School and enrolled at Ohio State University. Talking about his physical appearance, Malik stands six feet and one inch tall and weighs 97 kgs (214 lb).

Malik Hooker has an estimated net worth of more than $10 Million. He has accumulated most of his net worth as his salary and prize money from NFL. The average salary of an NFL player is more than $850,000. 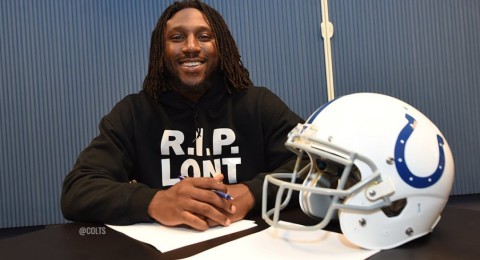 Malik played with Indianapolis Colts in the NFL SOURCE: ESPN

Who is Malik Hooker Dating? Know About His Relationship Status and Girlfriend

Malik Hooker is involved in a romantic relationship with his longtime girlfriend. He is very much private about his personal life. As per sources, Hooker is dating a girl, but there is not a single word about her. She can be seen attending his games regularly.

Malik Hooker's Career at the NFL

Malik started playing American football from High School. He played basketball and football in his early days. Hooker was the Pittsburgh Post-Gazette Male Athlete of the year in his senior year. He got several athletic scholarships from universities but chose Ohio State University. Malik played in all 13 games in 2015 and recorded ten tackles. In 2016, the player was named in First Team All-Big Ten.

In 2017, Indianapolis drafted him in the NFL draft. However, he could not make it to the team after having undergoing surgeries for a torn labrum in his hip and a sports hernia. Several Experts ranked him the top free safety in the draft. He received $2.29 Million as his signing bonus. Malik played his first game in September 2017 along with Jabaal Sheard and Zaire Franklin. He finished his rookie season with 22 combined tackles, four pass deflections, and three interceptions in seven games and six.

In the 2018 season, Hooker did not have a good season. He only appeared in ten games. At the end of the season, He had a foot injury which kept him away from the games. In the following season, Hooker had similar games and could not make an impact in the games. At the starting of the 2020 season,  Hooker tore his Achilles, ending his 2020 season. Colts have declined his contract and have become a free agent in 2021.