Malcom was born Malcom Filipe Silva de Oliveira on February 26, 1997, in Sao Paulo, Brazil. He is the son of Flavia de Oliveira and her husband. Much about his parent is still under the radar. Oliveira has not shared much about his education and academic qualification. Talking about his physical appearance, Malcom stands five feet and seven inches tall and weighs 65 kg.

Malcom Oliveira has an estimated net worth of more than $10 Million. He has earned most of his net worth through his successful football career. A football player makes a handsome amount from their sponsorship and advertising deals. As per sources, Malcom has an annual salary of £5,564,000 playing with Zenit. He is the highest-paid player for the club and is among the highest-paid in the league. Malcom played with Barcelona for a season in 2018 SOURCE: [email protected]

Dejan Lovren is the second-highest-paid player for the club with an annual salary of £5,200,000. In July 2018, Malcom signed a five-year contract for a reported transfer fee of €41 million plus an additional €1 million in bonuses. In 2016, Bordeaux paid €5 million for half of his economic rights with Sunderland. He is very early in his career and will be making millions in the future.

Who is Malcom Oliveira Dating? Know About His Girlfriend and Relationship Status

Malcom is very open about his relationship status. The Brazilian football player is involved in a romantic relationship with his longtime girlfriend, Leticia Pereira. The love birds have been dating each other for more than five years. Nothing much about their first meeting experience is shared with the public. 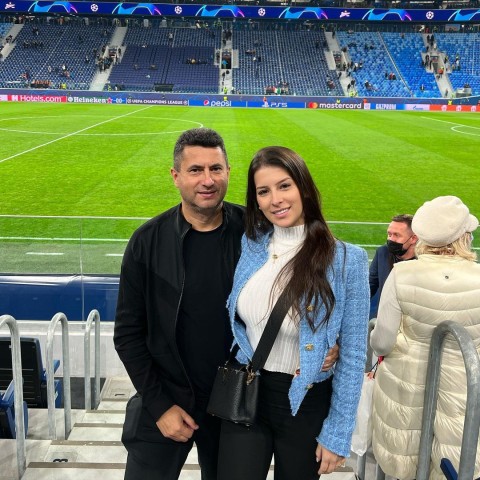 Malcom played with Barcelona for a season in 2018 SOURCE: [email protected]

Malcom and Leticia keep visiting famous holiday destinations. In early 2022, The duo had been to Dubai for their vacation. Both are active social media users and keep sharing pictures on their timelines. Although They have been dating each other for more than five years, The couple is yet to get engaged or tie their wedding knot.

Malcom started his youth career with Corinthians in his hometown. He joined the club in 2008 and reprinted them in numerous divisions. Oliveira made his professional debut in March 2014 with Corinthians and signed a two-year contract with the club.

Malcom appeared in sixty-two games with the club and scored ten goals. In January 2016, Bordeaux signed him and paid €5 million for half of his economic rights. The following season, He extended his contract until 2021 but moved to La Liga giants Barcelona on a five-year contract for a reported transfer fee of €41 million. The player did not get much chance with the club and moved to Russia and joined Zenit in a five-year deal for a €40 million fee with an additional €5 million.