Mahmoud Dahoud is a rising German professional football player. He is currently playing in German Football League, Bundesliga for Borussia Dortmund. Dahoud turned professional in 2014. Mahmoud plays as a Midfielder for his club and country. The player has represented the German National team.

Mahmoud Dahoud was born on January 1, 1996, in Amuda, Syria. He did not come from a reputed family and shared much about his early life and parents. Mahmoud has a younger brother Said Dahoud. His family moved to Germany shortly after his birth. Talking about his physical appearance, Mahmoud stands five feet and ten inches tall and weighs 68 kg.

Mahmoud Dahoud's Net Worth in Millions

Mahmoud Dahoud has an estimated net worth of more than $5 Million. A football player will be earning a handsome amount from their sponsorship and advertising deals. Dahoud is very early in his career and will be adding millions in the future. He has an annual salary of £3,380,000 while playing with Dortmund. Mahmoud has a weekly wage of £65,000. 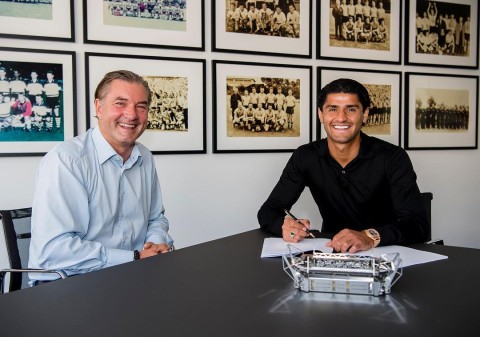 Mahmoud shares a photo of signing a contract with BVB SOURCE: [email protected]

Mahmoud is very private about his relationship status. The football player could be single, dating, or engaged to his fiance. Dahoud is an active social media user. His timeline is filled with photos of his games, friends, and vacations. He spends his free time with his family and goes on holiday regularly.

Mahmoud started training with SC Germania Reusrath near his hometown. He later moved to Fortuna Dusseldorf and represented them in numerous divisions. Dahoud eventually moved to Borussia Monchengladbach, trained with its youth team until 2014, and made his professional debut against FK Sarajevo in the Europa League game. Mahmoud had signed his first professional contract, agreeing on a deal to keep him at the club until June 2018.

Dahoud became the first Syrian-born player to ever play in the Bundesliga. The player appeared in sixty-one games for the club and scored seven goals. He did not extend his contract and then moved to Borussia Dortmund and signed until 2021. Mahmoud extended his contract until 2023 in early 2021. He has established himself as a club's first-choice player and appeared in eighty-seven games alongside  Haaland  and Roman Burki

Mahmoud has been part of Germany's numerous divisions. He made his international debut in 2014 with the Germany U18 team. The player earned his U19 call in 2015 and played until 2016. Dahoud became a regular player with the U21 squad, appeared in twenty-two games, and scored four goals. In 2020, Mahmoud made his senior team debut against Turkey in a friendly match.