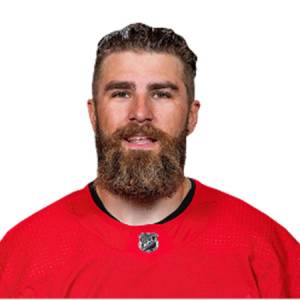 Luke Witkowski is an American professional Ice-hockey player who plays in the National Hockey League (NHL). As of 2018, Luke Witkowski currently plays for the Detroit Red Wings as their Defense/Right Wing. Previously, he played for Tampa Bay Lightning.

As a Defense/Right Wing, Luke Witkowski reportedly earns around $750,000 as his yearly salary from Detroit Red Wings. Further, Luke Witkowski has an estimated net worth of over $1 million. Additionally, he is in a romantic relationship with his girlfriend, Erin.

Luke Witkowski Net Worth And Salary

Exploring his personal life, he is unmarried but reportedly, he is in a romantic relationship with his girlfriend,  Erin. Apart from the fact they are in a relationship, the detailed information about their relationship is yet to be flashed to the general public.

Merry Christmas from a couple of filthy animals!

Although being in a relationship for long, they haven't planned for getting married until now. However, the couple might be waiting for the perfect time to get married and start a family.

Further, exploring his Instagram account, he seems to be an animal lover and we found that he is a parent of two dogs with whom he spends most of his free time.

Luke Witkowski was born on April 14, 1990, in Holland, Michigan, the U.S. However, the details about his parents and siblings are not in the media yet. As per his nationality, he is American and belongs to the White ethnic group. Further, his star sign is Aries.

He was drafted by Tampa Bay Lightning in  2008 NHL Entry Draft. The Tampa Bay Lightning announced Witkowski's signing of a two-year entry-level contract on April 1, 2013. Witkowski made his NHL debut on 20 January 2015 in a 4-1 victory over the visiting Vancouver Canucks.

The Lightning announced Witkowski resigned to a one-year, two-way contract on July 17, 2015. Later, Witkowski recorded his first NHL assist and point on December 8, 2016.

Currently, he is playing along with his star team-mates such as Justin Abdelkader, Dylan Larkin and many more.