Zach Werenski is an American professional Ice-hockey player who plays in the National Hockey League (NHL). As of 2019, Zach Werenski currently plays for the Columbus Blue Jackets as their Defense. Further, he has represented the national team of USA in U-17 level.

As a Defense, Zach Werenski reportedly earns around $1,775,000 as his yearly salary from the Columbus Blue Jackets. Further, Zach Werenski has an estimated net worth of over $1 million. Further, he is in a romantic relationship with his girlfriend, Odette peters.

Zach Werenski Net Worth, Contract, and Salary in 2019

Zach Werenski has earned $1,850,000 from his entire NHL career while Sidney Crosby is one of the highest earners of NHL with the overall career earnings of $109,290,244.

Werenski is not married yet but reportedly is in a relationship with his girlfriend, Odette peters. Apart from the information, there aren't any further details about their relationship.

Although the couple has been in a relationship since long, they haven't revealed any plan of getting married yet. His girlfriend, Odette has also posted several photos with Zach on her social media account but as of now, she has set her account private. 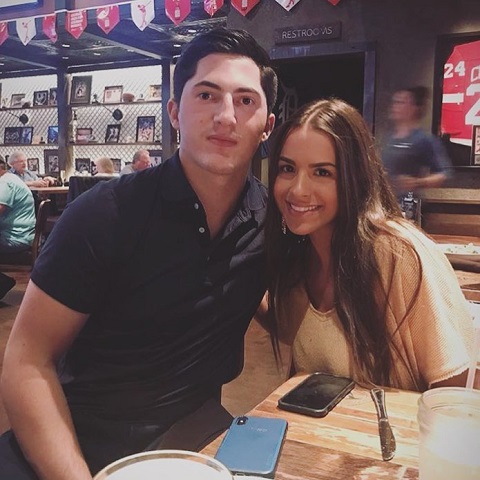 However, the couple seems to be in a smooth relationship as they frequently post a picture of them together in social media accounts, enjoying a vacation.

Zach Werenski was born on July 19, 1997, in Grosse Pointe, Michigan, the U.S to parents Ken Werenski and Kristen Werenski. As per his nationality, he is American and belongs to the White ethnic group. Further, his star sign is Cancer.

Further, he grew up with his brother named, Brad Werenski.

He attended the University of Michigan and played for their hockey team. Werenski was named to both the 2014 - 15 Big Ten All-Freshman Team and the All-Big Ten First Team after an outstanding rookie season.

Werenski made his debut in the opening game of the season for the Blue Jackets on October 13, 2016, and scored his first NHL point with an assist. In Game 3 of the First Round, Werenski was injured playing against the Pittsburgh Penguins when Phil Kessel's shot rode up to his stick shaft and hit him in the face.

In the Calder Memorial Trophy vote, Werenski was voted third, an award given annually to the league's best rookie. The award eventually went to Auston Matthews of Toronto Maple Leafs.

Werenski represented the United States in the 2014 World U-17 Hockey Challenge, where he won a gold medal. At the 2016 World Junior Ice Hockey Championships, Werenski was named the captain of USA team. In seven games, Werenski registered two goals and seven assists and won a bronze medal.