Luke Joseph Fickell is an American football coach who is the current head coach of the University of Cincinnati. He began his career at Ohio State University, initially as a player and later as an assistant coach.

Columbus, Ohio native, Luke Fickell was born on 18th August 1973, under the star sign Leo. The forty-eight years holds an American nationality and is of white ethnic background.

How Much Is Luke Fickell's Net Worth In 2021? Salary & Contract

Cincinnati and Luke Fickell has agreed on a contract extension through the 2026 season that will increase the head coach's salary to $3.4 million annually. The extension puts Fickell in the top 40 among the highest-paid college football coaches.

As per the deal, Fickell will receive a base salary of $250,000 and additionally supplemental compensation payments for his involvement in television, radio, and personal appearances, and private and public speaking engagements.

As of 2021, Luke Ficjell's net worth is approximately $5 million.

Fickell enrolled at DeSales High School where he started his playing career. He was a two-time first-team All-Ohio defensive tackle and 3X state champion in wrestling.

After being redshirt in 1992 for Buckeyes, he was a standout defensive player and made a school-record 50 consecutive starts at the nose guard position (1993-1996). Though suffered from a torn pectoral muscle, Fickell began the 1997 Rose Bowl where he made two tackles in the Buckeyes won against Arizona State.

Upon graduation from Ohio State, Fickell signed as an undrafted free agent with the New Orleans Saints of the National Football League (NFL) in 1997. However, following his tearing the ACL in his knee, for the rest of the season, he remains on the injured reserve list and later Saints released him.

In 1999, Luke Fickell served as the graduate assistant at Ohio State. In 2000, he joined the University of Akron as the defensive line coach.

Following two seasons, Fickell returned to Ohio State as the special team's coordinator in 2000. In 2004, he took over as the linebackers coach and co-defensive coordinator later two years. In 2010, he won the Assistant Coach of the Year by the AFCA.

On 10th December 2016, Fickell was named as the 39th head coach of the University of Cincinnati, replacing the resigning Tommy Tuberville. Under his coaching, the team has won the 2019 AAC East Division and the 2019 AAC Championship. Individually, Fickell has won 2X AAC Coach of the Year (2018, 2020).

Fickell is married to Amy for a long time now. The couple met at Ohio State and started dating when Amy was a sophomore at Ohio State. Amy has a physical therapy degree from Ohio State. 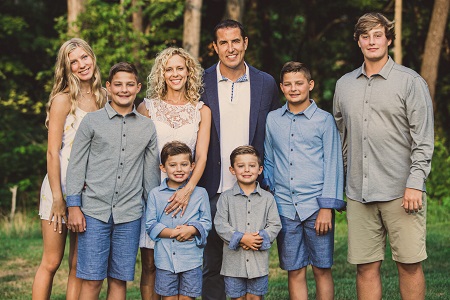 In 2000, Fickell and Amy tied the knot. The duo has now six children: five sons, including two sets of twin boys and one daughter. The Fickell family is Roman Catholic, which played a vital role in Fickell's interest in coming to Cincinnati.

Moreover, their eldest son, Landon, a graduate of Moeller High School, committed to Cincinnati as part of the 2021 recruitment class.