The 41 years-old Luke Donald proves himself as one of the successful and promising players in the field of golf. He has been outstanding throughout his career. The year 2011 was incredible for him and in the same year has won several awards and tournaments.

He has been the World Number One player and plays mainly on the U.S based PGA Tour and he is the member of European Tour.

How Much Is Luke Donald Net Worth In 2019? Know His Salary

As of 2019, Luke Donald has an estimated net worth of $40 Million, mostly earned through his golf career. He is ranked #10 in the list of the 10 Richest Golfers of All-Time where Tiger Woods, Phil Mickelson, Arnold Palmer, and Greg Norman are on the top list.

Additionally, has partnered with Terlato Wines to create a collection of bespoke wines which also adds the decent sum to his bank balance.

On 12th February 2019, Luke sold his six-bedroom, 10,555-square-foot mansion in Northfield for $3.9 million. He paid $3.725 million for the mansion in 2008 and first listed it in July for $4.5 million. Built-in 2006, the two-story, traditional-style mansion has eight bathrooms, five fireplaces, a butler’s pantry, a golf simulation room, a wine cellar, a workout room, and a bar and entertainment area.

This former top-ranked golfer has his own wine label and similarly enjoys a fine vintage of the automobile.

In an interview with the BMW blog, he said “I’ve always loved cars,” he said, “When I earned my first paycheque, a car was one of the first things I bought – it was a BMW 3 Series Coupe.”

Luke Donald married his sweetheart Diane Antonopoulos on 24 June 2007 in Santorini, Greece. He proposed her in June 2006. Her wife is not only beautiful by her personality but also by her heart. She helps her spouse in every circumstance. She is supportive and caring. 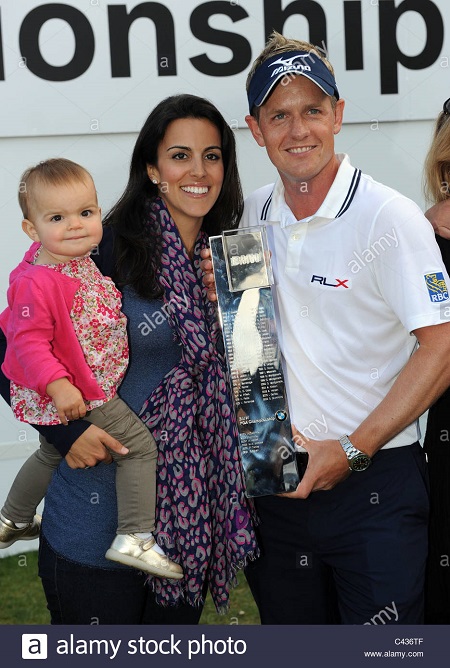 CAPTION: Donald and his wife Diane and his Daughter Elle SOURCE: Alamy

As he is also loyal to his wife and their relationship is relying on mutual trust and understanding. They are blessed by three lovely daughters.

Apart from his game, he accepted the painting as his hobby and he is the supporter of Tottenham Hotspur Football Club. He is also the Member of the Order of the British Empire. He also established himself as a successful Entrepreneur. He is an Entrepreneur of small business.

He was born in the year 1977, on 7th of December and Hertfordshire, England was his birthplace. He is a British by his nationality and his ethnicity is white. He is the proudest son of his parents, he has also mentioned about his parents, and they are Ann Donald and Colin Donald. Christian Donald is his brother.

His father was from Stranraer, from Southwest, Scotland. He has called himself “half Scottish”. He went to Rudolf Steiner School in Kings Langley and later after that he moved to Royal Grammar High School, High Wycombe. He also played at Hazlemere and Beaconsfield Golf Clubs. He had grabbed a golf scholarship at Northwestern University in 1997.

While taking education at Northwestern, he was also became a member of Sigma Chi Fraternity. He was terrific and manages to win the individual NCAA Division I Men’s Golf Championship’s men’s title in 1999, beating the scoring record formerly held by Tiger Woods.

He turned professional in 2001 and from one and a half decades he has been serving as one of the greatest and successful players of golf. Prestigious awards and rewards honored him.

His games and matches can be viewed on YouTube and several sports channel. He has the perfect capability to swing the ball.

As he has set several records U.S Open, The Open Championship, PGA Championship, and Masters Tournament, so he has a huge amount of fan and followers from around the world.