Luke Ayling is an English professional footballer who is signed to the Premier League side Leeds United of the Premier League. Normally he plays as a right-back but can function as a center-back or as a defensive midfielder.

Lambeth, England native, Luke Ayling was born on 25th August 1991, under the star sign. The thirty years old holds an English nationality and is of White Caucasian ethnic background.

How Much Is Luke Ayling's Net Worth In 2021? Salary & Market Value

Luke Ayling is married to Poppy. The couple tied the knot on 9 June 2021, held at Lime Wood Hotel, a 5* venue in Lyndhurst, Hampshire, with singer-songwriter Ellie Goulding performing at the ceremony. 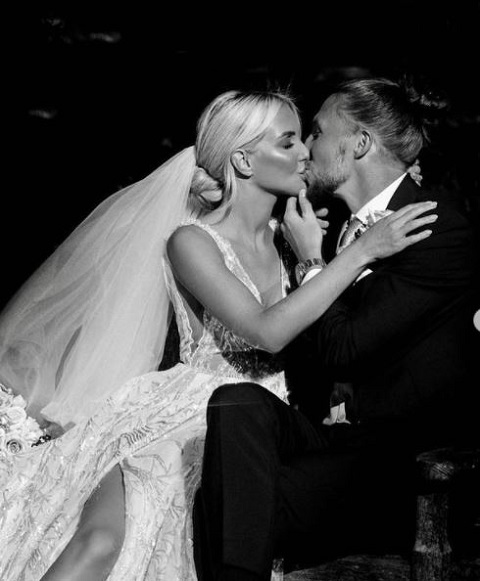 Luke and Poppy welcomed her first child, a daughter, Maisie, born in March 2017.

An academic product of Arsenal, he joined the club at the age of 8 despite being a Chelsea fan.

In June 2009, Ayling signed his first professional contract with Arsenal. He received his first call from the first-team squad during the 2009–10 season. On 9th December 2009, he was an unused substitute for a dead rubber 1–0 UEFA Champions League group stage loss to Greek team Olympiacos.

Ayling departed the club in June 2010 after his contract expired.

In March 2010, Ayling joined the League One club Yeovil Town on loan for an initial month. On 2nd April 2010, he made his professional debut as a second-half substitute in a 0–0 draw away at Southend United.

On 30 June 2010, he signed with Yeovil on a permanent basis, making his debut in a 2–1 victory over Leyton Orient. Overall, he appeared in 162 games and scored 2 goals for Yeovil.

On 8th July 2014, Ayling signed to League club Bristol City, agreeing on a three-year deal. On 9th August 2014, he made his debut for Bristol City in their opening day victory over Sheffield United.

In August 2016, Ayling signed for Championship rivals Leeds United. In the 2021-22 opener, he scored his first goal for Leeds in the Premier League, coming in a 5–1 defeat to rivals Manchester United at Old Trafford. He was nominated as one of the Premier League's Goals of the Month for August.