Luka Smanic is a Croatian college basketball player, who used to play for Petrol Olimpika od the Slovenian League and ABA league. The player has also been projected as one of the top prospects of the 2019 NBA draft.

This FIBA Europe Under-18 Championship player will be earning a huge amount of money and his net worth will rise rapidly in the coming past few years. Let's dig in and find out all this player's inside out.

Luka Samanic's Personal Life; Is the player Single or Dating Someone?

The famous 2019 top prospect of the NBA, Luka Samanic is currently single at the moment. Further, Luka is just 19 years old and is too young to get married. Moreover, we don't have any past records of his relationship. 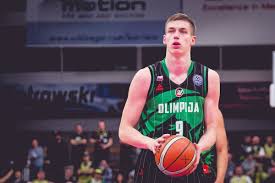 Further, on exploring his twitter account, there is much content about basketball. It seems that he is quite attracted to basketball. He shares his basketball skills with his 500 followers. Well, after the player gets signed to the NBA these numbers will increase rapidly.

Luka Samanic stands 2.10 meters tall in height (6 ft 11 in). Further, he has a well-maintained body that weighs about 209 lb (95 kg). Further, his body measurements are not available. Besides, he has blonde hair and brown eyes.

Luka Samanic's Net Worth; How much will he Earn after signing to the NBA?

Luka Samanic was born on 9 January 2000, in Zagreb, Croatia. Talking about his family background, he has not disclosed anything about his family members. Further, Lika holds Croatian nationality. However, facts regarding his ethnicity have not been revealed.

Further, the player loves to play football and table tennis beside basketball. He often takes advice from other professional basketball players. He admires Toni Kulkoc quite a lot. Šamanic has also compared his playing style to NBA players Kristaps Porzingis and Kevin Durant.

Luka Samanic started playing basketball at the youth levels with the local club named Zagreb. He collected 29 points, 10 rebounds, 4 steals, and 3 blocks for Zagreb in a 22 November 2014 win over the junior team for Šanac Karlovac. Further, on November, he recorded 43 points, 7 steals and 8 rebounds for the same club Zagreb and helped the team to defeat Samobor.

Later, on 31 May 2018, Luka signed a multi-year professional contract with Petrol Olimpija of the Slovenian League and ABA league. His reason to join this club was due to some unclarified dispute with the club Zadar.