Luka Ivanusec is a Croatian professional footballer who is signed to the Prva HNL club Dinamo Zagreb as an attacking midfielder. A full international since 2017, he has earned 11 cap with a goal from Croatia national team.

How Much Is Luka Ivanusec's Net Worth?

The significant source of Luka Ivanusec's income is his football career. Dinamo Zagreb's No.7 attacking midfielder makes £6,000 per week which is £312,000 per annum from the club.

Luka Ivanusec's current market value is €13.50 million.  Invanusec's net worth is approximately $0.5 million. A football player has multiple sources of income including sponsorship and advertising deals. Luka is pretty early in his career and will be adding millions.

Luka Ivanusec is in a relationship with Tia Vugrinec. The couple started dating back in August 2019. 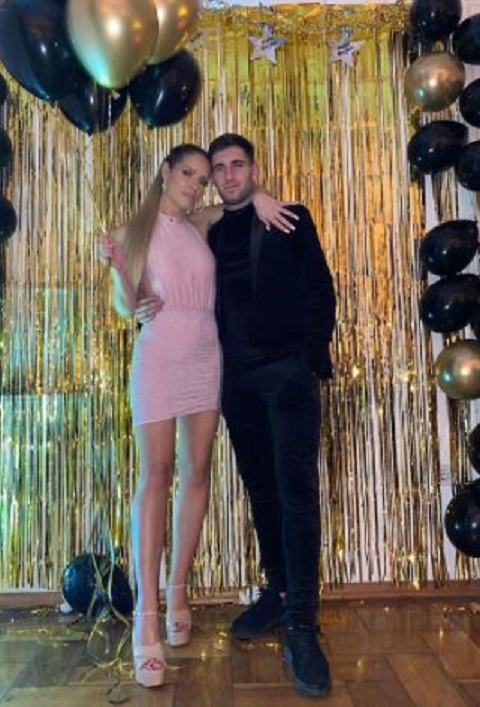 The footballer shares every bit of their relationship on Instagram where he has 28.7k followers. On the other side, Tia has maintained a low-key personal life. Additionally, she has set her Instagram account private.

Luka Ivanusec played for Novi Marof (2008-2009), Varazdin (2010-15), and Lokomotiva (2015-16) during his youth career. On 20th December 2015, Ivanusec made his professional debut for Lokomotiva in the Prva HNL against Slaven Belupo, coming as an 85th-minute substitute for Josip Coric in a 3-0 win. He did not play any game until the next season making his European club debut against Andorran side Santa Coloma on 20th June 2016.

On 13 December 2020, in a 2–2 derby draw with Rijeka, he scored one of the fastest goals in the history of the Prva HNL, scoring after only 21 seconds.

At the international level, Ivanusec played for Croatia U17, Croatia U18, Croatia U19, and Croatia U21.

On 11th January 2017, I made his international debut for Croatia in the 2017 China Cup against Chile, coming as a 90th-minute substitute for Franko Andrijasevic in a 4-1 loss. On 7 June, he was listed in the UEFA Under-21 Euro 2021 Squad of the Tournament.

Luke is among the top player that will represent the country in the upcoming 2022 FIFA World Cup.