Footballer Lucas Martinez Quarta is a native of Mar del Plata, Argentina who plays for Serie A club Fiorentina as a centre back. Besides, the professional footballer also plays for the national team of Argentina and has been a part of numerous games. Quarta made his international debut on September 5, 2019, during a friendly match against Chile.

Further, Quarta joined his current team, Fiorentina, on October 5, 2020, and since then, he has been helping the team in most of their games. Before that, he also played for some other teams. For the national team of Argentina, Quarta has played an essential role in winning the title of Copa America in 2021.

His Salary and Net Worth Revealed

Currently, Quarta plays for Serie A club Fiorentina, and Salary Sport reports that he earns £25,000 per week and £1,300,000 per year playing for them. Transfermrkt says Quarta received a deal worth €13.00m while moving from River Plate to Fiorentina.

Likewise, the same report shows that Quarta's market value is €12.00m, but it is not his highest value which was €15.00m on December 28, 2021. Having a good salary, Quarta's net worth may be in the millions, but the actual amount of his net worth remains under review as none of the verified sources have given the fact. 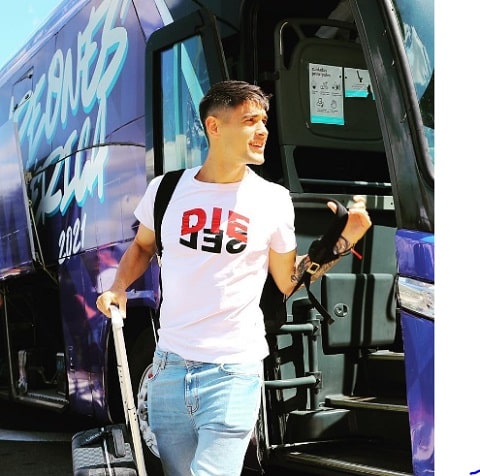 Apart from earning from his profession, Quarta also makes some gains from sponsorship and endorsement deals. Being a professional footballer, Quarta has surely worked with some sports brands that might be paying him well. According to the Influencer Marketing Hub, Quarta has a chance to earn $2,242.5 - $3,737.5 from a single sponsored post on Instagram, where he has gained over 1 million followers.

Details On His Wife and Children

The professional footballer Quarta is a married man, and he relishes his life with his loving wife, Agustina Caniglia. Caniglia and Quarta have been in a marital relationship for many years now, but the actual date of their wedding remains unknown as they have kept the details away from the media prominence.

Furthermore, Quarta and his wife live happily with their kids. They are blessed with three children named Bautista, Mia, and Alba. The family of five lives together, and we can get updated on their life by following the professional football player on his Instagram handle, where he often posts their pictures. 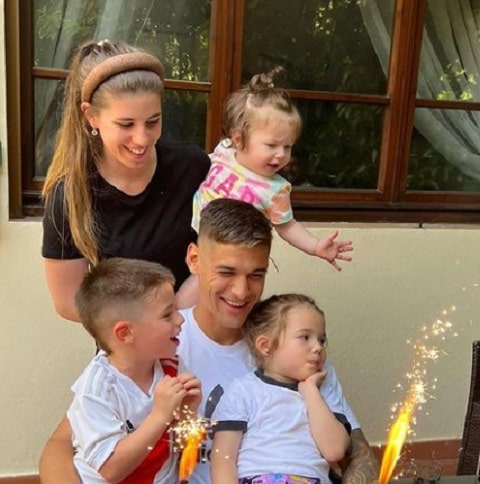 Lucas Martinez Quarta having a good time with his wife and kids SOURCE: Instagram @chinomartinezquarta96

Not to mention, Quarta's wife is a supportive partner who has appeared in his various games to support him. She is also an active Instagram user whose username is @guchicaniglia and has gained more than 94.8k followers at the time of this writing.

Quarta started his football career by playing with Kimberley. After that, he played for River Plate. After finishing his youth career, Quarta also started playing with the senior team of River Plate and made his professional debut for the club in November 2016.

Furthermore, Quarta was also a part of the team that won the title of the 2018 Copa Libertadores. He made 64 appearances for the team of River Plate and scored two goals for them. While he played for River Plate, he also played a significant role in helping the team to win Copa Argentina (2017, 2019), Supercopa Argentina (2018), and Recopa Sudamericana (2019). Later, Quarta got an offer to play for Serie A club Fiorentina. 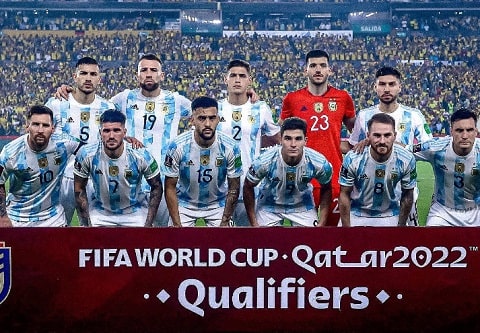 So, with the Fiorentina team, Quarta signed a five-year deal on October 5, 2020. Since then, he has been playing actively for the team. In addition, to being an important player in his club, Quarta is also a national player who represents the national football team of Argentina.

Quarta made his international debut on September 5, 2019, by playing the whole game against Chile. In 2021, the Argentine team won the title of Copa America, and Quarta was also a part of it.

Born in 1996, Lucas Martinez Quarta is 26 years old as of 2022. Quarta is a native of Mar del Plata, Argentina. So, he holds Argentine nationality and stands at an average height of 5 feet 11 inches. The young player shares a strong bond with his beloved parents, Jorge Martinez Oliver and Silvina Quarta. Not to mention, Quarta's birth sign is Taurus. There is very little information regarding his early life, as Quarta has not given many hints about it. But it is believed that his father and mother have supported him since the beginning of his career.

You May Read: Christian Pavon

Moving onwards, Quarta is an active social media user who is available on Instagram and Twitter. Mainly, Quarta is an Instagram user who is registered on the platform under the username @chinomartinezquarta96. On the respective account, Quarta has accumulated more than 1.1 million followers at the time of this post.

On the other side, the 5 feet 11 inches Quarta also has a solid fan base on his Twitter account, where we can follow him as @chinomartinez28. He opened the Twitter account in December 2016, and from there, Quarta has been sharing his professional life.

His IG bio shows that he is based in Firenze, Italy, and his agent is Twenty Two, a players management agency. So, from these social media handles, Quarta keeps his fans updated with his personal and professional life.