Louise Duncan is a rising Scottish amateur golf player. She rose to fame after winning the 2021 Kilmarnock Gold Club in August 2021. Duncan has won more than half a dozen Amateur golf events until 2021. She is yet to start her professional career in golf.

Know About Louise Duncan's Net Worth, Sponsors, and Earnings

Louise Duncan has an estimated net worth of more than $100,000. A golf player does not need to win an event or series to earn their prize money; rather, they get paid based on their score at the end of the event. Nobody in the games goes empty-handed. Also, They make a huge sum through their sponsorship and advertising deals with numerous brands. 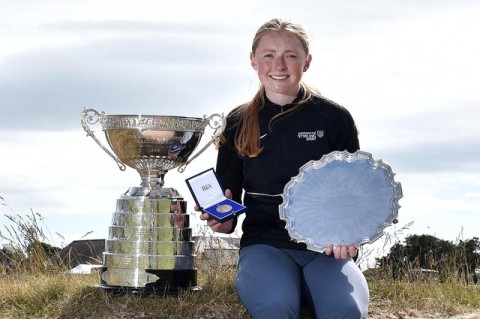 Louise wears the hat of Ping, and Aberdeen Standard has sponsored her wearing apparel. Also, She uses her golf club from Ping. They have not shared a word about their sponsorship deal. Duncan is very much early in her career and will be making millions in the future. As per sources, Duncan was denied £640,000 as her prize money.

Who is Louise Duncan Dating? Know About her Boyfriend and Partner

Louise is an active social media user. She keeps posting numerous photos of her games, training, and vacations in Europe. Following her timeline, we can confirm that Duncan is involved in a romantic relationship with her longtime boyfriend, Jordan Hughes. The love birds have been together for more than two years. They have not shared a word about their first meeting instance.

Jordan's profile is private and has not been shared about his life. He works as her caddie. Duncan first shared a photo with Hughes in June 2019. Since then, Both of them can be seen in numerous events. The same year, They had been to Russia and France for a vacation. Both of them seem to be very much supportive of each other.

In 2019, Louise had a decent year and finished T2 in the BUCS Golf Tour- Fifa Tournament. In 2020, She played in just three events and won the R&A Student Tour Series-Portugal. In 2021, Duncan has appeared in seven events and won the 2021 Women's Amateur Championship. Louise finished at the T10 position in the AIG Women's Open.