Giulia Molinaro is a well-established Italian professional golf player. She has been playing at the professional level for almost a decade. Guilia turned professional in 2012. Molinaro currently plays under the LPGA Tour and is part of the Symetra Tour at her early age. Giulia is yet to win a major event in the LPGA Tour.

Giulia Molinaro was born on July 23, 1990, in Camposampiero, Italy. She is among the two children born to Fabrizio Molinaro and his wife, Marica Molinaro. She has a sister. Molinaro spent most of her childhood with her sisters in Kenya. Giulia rose to fame only after her successful career so, much information about her early life and her parents is under the radar. Talking about her physical appearance, Giulia stands five feet and ten inches tall and weighs 72 kg.

Giulia Molinaro has an estimated net worth of more than $500,000. A golf player earns most of their earnings through their points in their game. They do not need to win a series. In addition, They earn a handsome amount through their sponsors. Giulia has been making much of her net worth through her LPGA tours.

Guilia is very much concerned about her game. She has kept her relationship away from her personal life. Molinaro is believed to be single as of 2021. Her timeline of 13.7k followers is filled with photos of her vacations around Europe and Africa. She is very close to her family and spends most of her time traveling to famous vacation destinations.

Guilia Molinaro started playing golf at the age of twelve. After completing High School, Giulia enrolled at Arizona State University and played golf for the team. She turned professional right after graduating from the University in 2012. Molinaro started her professional career playing in the Symetra Tour, where she won an event and finished the season second on the money list. 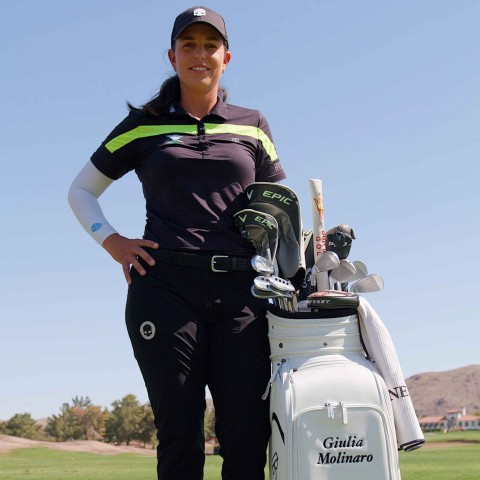 CAPTION: Giulia has been playing in the professional level since 2012 SOURCE: Getty Images

In 2014, Giulia made her LPGA debut and finished the season, ranking 114th on the money list. In 2016, Molinaro represented Italy in the 2016 Olympics. Before turning professional, She won the 2007 Girls Junior Orange Bown. In 2012, Giulia won the 2012 Swiss International Amateur Title. In 2013, Molinaro won her only professional title of Friends Of Mission Charity Classic. Giulia is currently playing in the Kingsmill River Course along with Jessica Korda and Moriya Jutanugarn