Lorenzo Mauldin is a renowned professional gridiron football who plays for the Ottawa Redblacks of the Canadian Football League (CFL). Since February 8, 2022, he has been playing for the team of Redblacks. His main position is a defensive end, and he wears jersey number 94.

The 29-years-old has been cherishing his romantic Life with his wife, Erika Mauldin. The couple recently got married, but they have already started their family. For your information, Mauldin and his wife have a daughter who was born when they were dating each other. Moreover, the pair lives a lavish Life as Mauldin makes a huge sum from his work.

Lorenzo Malik Mauldin IV was born on October 1, 1992, in Sacramento, California, making his age 29 years as of early 2022. Mauldin holds an American nationality, and he peaks at the height of 6 feet 5 inches (1.96m). The player weighing 120 kg, spent most of his early days with 16 different foster parents as both his mom and dad were in jail. His dad, Lorenzo Mauldin III, served nearly 12 years in prison.

On the other hand, his mother, Akima Lauderdale, was reported to be a drug dealer when Mauldin IV was just seven years old. She was convicted of voluntary manslaughter. After being released, Lauderdale was sent back to jail for aggravated assault, released, then sent back again.

Mauldin IV went to Maynard H. Jackson High School in Atlanta, Georgia. There Mauldin played football and basketball and competed in track. In high school football, he was named to Class AA All-State Team and in track and field competed in events varying from the high jump to the discus throw.

At the 2010 Whitefield Meet, Mauldin IV took 4th in the discus throw and 2nd in the shot put. Furthermore, he was rated as the 82nd-best player in Georgia. He got offers from various teams, including Middle Tennessee, South Alabama, Troy and South Carolina, but chose to be at Louisville. As a true freshman in 2011, Mauldin played in all 12 of the Cardinals' games and recorded six tackles. As a sophomore in 2012, he began six of 11 games, recording 22 tackles and a team-leading 4.5 sacks. In August 2013, he was involved in a hit-and-run moped accident. He recovered and started all 13 games in the junior season. Moreover, Mauldin finished the year with 40 tackles and 9.5 sacks. Before his senior season in 2014, he was moved from defensive end to linebacker.

After finishing his college career, he was drafted by the New York Jets in the 3rd round with 82nd overall of the 2015 NFL Draft. On May 7, 2015, he was signed by the team for a four-year, $3 million contract. On September 13, 2015, Mauldin IV played his first regular-season game against the Cleveland Browns. During that time, he forced a fumble off Johnny Manziel but suffered an apparent neck injury and was induced unconscious for a few minutes, carted off the field. So, he was taken to a local hospital.

After undergoing tests, Mauldin was diagnosed with only trauma and no serious neck injury. During his rookie season in 2015, he played 15 games, making ten tackles, four sacks, and a fumble recovery. On September 4, 2017, Mauldin was placed on injured replacement after dealing with a back injury throughout training camp and was released on September 1, 2018.

On January 4, 2021, he re-signed with the Hamilton Tiger-Cats to a one-year contract. For some time, he played for that team, and on February 8, 2022, he was signed by the Ottawa Redblacks. Since then, Mauldin has been playing for the team.

Being one of the most notable defensive backs, Mauldin has earned a decent amount of money. Some online portals say that his net worth is somewhere around $1 million to $5 million. In the year 2018, he had a salary of $700,000. For your information, CFL players earn around $50,000. So, Mauldin might earn in the same range from his profession. 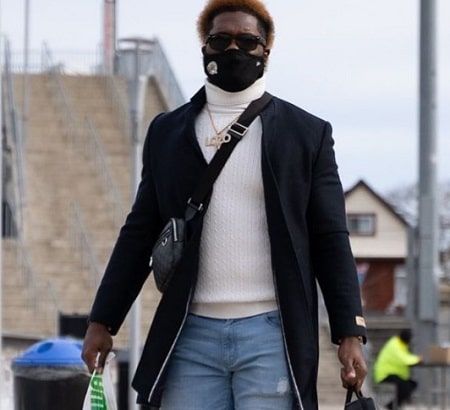 The maximum wage received by the CFL player is over $60,000 to $80,000. As we know, Mauldin has played for various teams, and he has surely preserved a good fortune. As mentioned earlier, Mauldin signed a $3 million contract with New York Jets. As he is still active in this field, his earnings will surely increase in the future. Apart from making money from his playing career earns from sponsorship and endorsement deals.

According to the Influencer Marketing Hub, Mauldin has the potential to earn around $80.25 - $133.75 from a single sponsored post on Instagram, where he has gathered over 13.4k followers as of early 2022. As per his IG bio, he is also the owner of Iron Cardinal Fitness Training. It is a fitness company that specializes in a workout and also sells various products related to fitness. So, Mauldin might be making a good profit from his business too.

Moving into his personal life, Mauldin is a married man and has a loving wife named Erika Mauldin. They dated each other for some years before getting engaged, but the exact date is unknown as both of them have not opened up about it with the media. 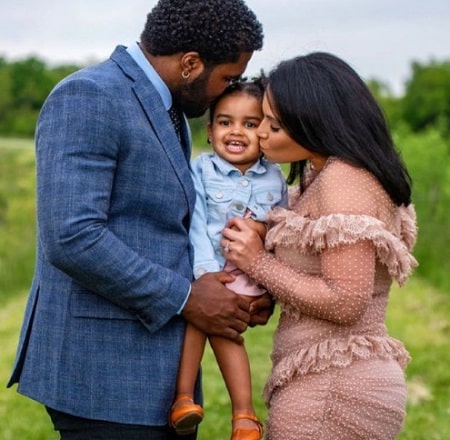 CAPTION: Lorenzo Mauldin has a daughter with his wife SOURCE: Instagram @Mauldin.IV

Apart from that, the loving pair walked down the wedding aisle on March 27, 2022. The wedding ceremony was held in Garfield, NJ, and was held privately in the presence of their family and close ones. Since then, they have been leading their life as a husband and a wife.

Furthermore, Mauldin and his wife have already started their family as they are blessed with a cute daughter named Serenity Leigha Mauldin. She also has an Instagram account registered as @phat.girl.serenity, which is handled by her father and mother.

In addition to that, Erika is also an active user of Instagram, where we can find her as @erika_slm_. Her account is private.