Basketball guard for the Las Vegas Aces, Lindsay Allen was picked in the second round (14th overall) of the 2017 WNBA Draft by the New York Liberty.

Clinton, Maryland native, Allen was born on 20th March 1995 under the star sign Pisces. Alumni of the University of Notre Dame, she is an American by nationality and is of Afro-American ethnic background.

Currently playing side Las Vegas Aces, Allen's salary is not listed in the team's rooster pay list but as the freshers in the team earn around $40,000 per annum, her salary is assumed to be the same. Dearica Hamby, Kayla McBride, and Kelsey Bone are among the highest-earner of the team. 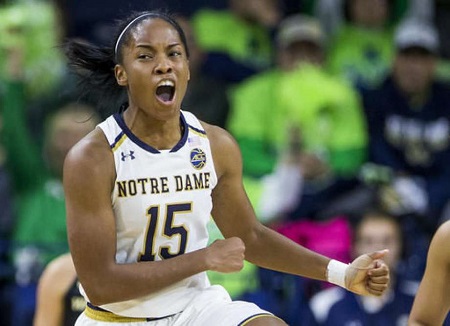 Besides, there is no financial data to be displayed. But looking at her career, her net worth is estimated at around $0.1 million as of 2019.

Nicknamed “L.A.”, Lindsay Allen was born as the youngest of three children to parents: Lorna Wilson-Allen and Terrell Allen III. Raised in Clinton, Maryland, she grew up playing basketball.

Allen is currently in a relationship with Ottawa-Glandorf legend, John Lammers. The duo began dating since 2018. However, the duo has not made any public apperance. More than that, there is not even a single photograph of a duo.

On a match against Atlanta on June 7, she scored a season-high 6 points.

Nevertheless, New York Liberty waived her for the second time on May 18, 2018. Later two days, she was signed by the Las Vegas Aces where she made the first start of her WNBA career in the Aces’ season-opener at Connecticut.

At the international level, she won a gold medal at FIBA Under-17 World Championship for Women.