UFC bantamweight fighter, Lina Länsberg (a.k.a. Elbow Queen) has compiled a record of 9-4-0 (win-loss-draw) since her professional debut in 2012. Before joining UFC in 2016, she competed for various events such as Cage Warriors, Battle of Botnia, Trophy MMA among others.

Länsberg, who was previously married to Martin Akhtar, is now dating her boyfriend, Akira Corassani. Further, she has an estimated net worth of $0.2 million.

Länsberg's net worth is 2019 is approximately $0.2 million mostly earned through her MMA career. Currently, she is signed to UFC, which is a significant source of her income.

Since joining UFC, she has recorded three wins and three loss, amassing $162,500 as her total UFC career earnings.

Earlier, she has competed at fighting events such as Odense Fight Night, Battle of Botnia, Superior Challenge, Cage Warriors FC, Heroes FC, and Trophy MMA 1, through which she might have received the decent sum.

Other than that, she owns a fighting academy named L-bow Academy, which helps her to generates extra income.

One of the hottest names in Swedish MMA, Lina Länsberg is currently in a relationship with a former UFC fighter, Akira Corassani. They started dating since late 2016. 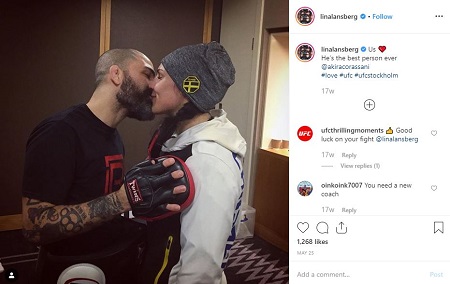 Länsberg and Corassani are not shy to flaunt their love to the world and often shares their adorable pictures on their respective Instagram account.

Länsberg was previously married to Martin Akhtar. Back in 2015, the married couple competed at the same event: Superior Challenge 12 where Lina faced Alexandra Buch, and Martin took on Antoine Gallinaro. Eventually, both won the fight. 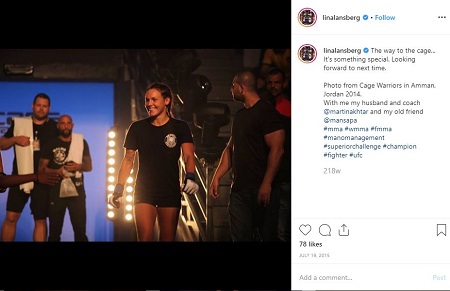 However, there is no further information about their relationship, such as: when did they marry and separated?

As of now, Martin is married and has two children with his wife.

On 24th September 2016, Länsberg made her UFC debut against Cris Cyborg at UFC Fight Night: Cyborg vs. Lansberg. She lost the fight via TKO in round two. Further, she faced Lucie Pudilová at UFC Fight Night: Manuwa vs. Anderson and won the bout via unanimous decision on 18 March 2017.

Interview with Lansberg after UFC Liverpool

In her 3rd UFC bout, she lost to Aspen Ladd at UFC Fight Night: Cerrone vs. Till. At UFC Fight Night: Thompson vs. Till, she defeated Gina Mazany via unanimous decision. On 6 October 2018, she was defeated by Yana Kunitskaya at UFC 229.

On 1 June 2019, she won a fight against Tonya Evinger at UFC Fight Night: Gustafsson vs. Smith.

In 2003, Länsberg began training in Muay Thai. At the top of her Muay Thai career, she won the gold medal at the IFMA World Championship two times, 2008 and 2012 respectively. She holds a Muay Thai record of 37-11, including fights against Valentina Shevchenko.