Leonardo Balerdi is a prominent footballer from Argentina who is a center-back for Ligue 1 club Marseille. The young football player has already made his debut for the national football team after making his debut for the senior squad on September 10, 2019. Besides, Balerdi wears jersey number 5 on his current team.

The talented and skilled football player has already impressed many people with his performances in various games. Balerdi started playing football after joining Sportivo Pueyrredon. After that, Balerdi played for some teams, and after joining Olympique Marseille on July 3, 2021, Balerdi has been with them and has been a part of many games too.

Marseille football player, Balerdi has preserved a decent fortune from his profession, but his current salary remains under review as Balerdi has not shared his earnings with the media. Talking more about his wages, Balerdi has been a part of various teams in the past with whom he had an amazing deal.

According to a report given by Transfermrkt, Balerdi has a current market value of €10.00m. Besides, his highest market value was €15.00m on March 6, 2019. In the past, Balerdi was a part of the Borussia Dortmund team with whom he signed a deal worth €15 million and also received an extreme of around €2 million. After that, Balerdi was loaned to Marseille, and the transfer fee was €1.00m. Since July 3, 2021, Balerdi has been playing with Marseille, and the Transfermrt reports that the professional footballer received a transfer fee worth €11.00m. So, being with all these teams, Balerdi's net worth must be in the six figures. Moreover, Balerdi lives a lavish lifestyle which can be explored by following his social media life.

Besides his professional life, Balerdi also lives a happy life, and he loves exploring different places with his friends.

Is Leonardo Balerdi Dating a Girlfriend?

The current relationship status of Balerdi appears to be single as he has not shared anything about his love life or girlfriend openly. At the moment, his foremost priority is his career, and rather than getting involved in a love affair, Balerdi is working hard to achieve more success.

Apart from that, Balerdi mainly prefers to stay away from the limelight, and rather than sharing his personal matters with the media; he keeps them far from the public domain. More to this, Balerdi has not been linked romantically with anyone. So, it can be said that the professional footballer has been leading a solitary life for a long time. Due to his private personality, none of the media platforms are able to collect information about his personal life or affairs. From his social media handles, Balerdi mostly posts images of his professional career and various games. Also, Balerdi appears to be a family person who spends most of his free time with his parents, and he also goes to different places with his friends.

Moving into his professional career, Balerdi began his career after being a part of the Sportivo Pueyrredon. After playing for them, Balerdi moved to play for Boca Juniors and made his debut for the team in the Argentine Primera Division by playing versus Club Atletico Huracan on August 27, 2018.

Balerdi was doing great, and his performances were also noticed by many people. Not only that, but Balerdi impressed many, and he gained fans too. Similarly, he received offers from other teams, and after making five appearances for Boca Juniors, he joined Borussia Dortmund in January 2019. 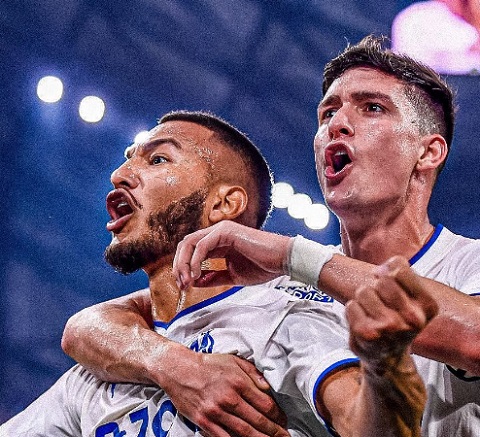 Leonardo Balerdi with his teammate after scoring a goal SOURCE: Instagram @leobalerdi5

On December 7, 2019, Balerdi made his Dortmund and Bundesliga debut during a game against Fortuna Dusseldorf. After appearing in some games, Balerdi was loaned to Olympique de Marseille in July 2020 on a one-year loan deal with a prospect to buy. From 2020 to 2021, Balerdi played in 21 games and scored two goals for the team.

Finally, on July 3, 2021, Balerdi signed a deal with Marseille, and the contract lasted for five years. Furthermore, Balerdi has already played for the national football team of Argentina. After playing for the U20 squad, Balerdi made his debut for the senior team on September 10, 2019, by playing against Mexico. Moreover, Balerdi is still playing football, and his career is growing daily.

More On His Personal Life

Moreover, Balerdi has made his parents proud as he has already gained a considerable fan base at a young age with his tremendous football skills. As Balerdi has not talked much about them, we are unable to share their details. But Balerdi is a family guy who has also shared some photos of his father and mother on his Instagram account. Leonardo Balerdi is close to his parents
SOURCE: Instagram 2leobalerdi5

Meanwhile, it is unknown whether Balerdi has siblings or not. As for his physical appearnce, Balerdi has a fantastic body with great stamina, which also helps him perform great in the field. Furthermore, Balerdi is a tall guy who stands at an impressive height of 6 feet 1 inch, which is 1.87 m.

Is Balerdi Active On Social Media? Leonardo Balerdi in one of his training session SOURCE: Instagram @leobalerdi5

Apart from that, we can follow him on Twitter, where he is registered as @leoobalerdi5. So, from these social media accounts, Balerdi keeps his fans updated with his personal and professional lifestyle.