Lebo Mothiba is a professional football player from South Africa who currently plays in the French top league, Ligue 1. He plays in the striker position for Troyes where he joined on loan in 2022. His original club is Strasbourg. He wears the number 26 for his current team.

He is a 1 time champion of Cupe de la Ligue which he won in the 2018-19 season when he was at Strasbourg. He has also represented South Africa in international tournaments. He won the Four Nations Tournament in 201 for the team.,

Who is Lebo?  Who are his parents?

Lebogang Mothiba, famously known as Lebo Mothiba was born on January 28, 1996, in Johannesburg, South Africa. According to astrology, his birth sign is Aquarius.

Information regarding Lebo's family background and early life is still a mystery. He was born to his father and mother whose name is not revealed yet. He has never talked about the in the public too. 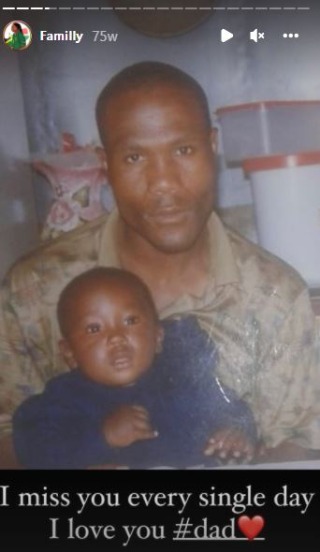 But he has several photos saved on his Insta where he classified as FAMILY. There he has posted photos of his other, father, mother, and siblings.

In one photo, we can see his father holding him. He was a baby at that time. And in the caption, he wrote, I miss you every single day. I love You, dad. So, it might be that his pop has already passed away.

He started his professional youth career with the South African team Mamelodi Sundowns where he joined in 2007. At that time, he was just 11 years old. After playing for 3 full seasons, he moved to Diambers Academy.

In 2014, he moved to the French club Lille. After playing for their youth team for a year, he was promoted to their A team in 2017. It was in 2018 when he moved to Strasbourg before joining Troyes on loan in 2022.

His weight is around 78 kg and has short black hair.

Contract, Salary and Net worth of Mothiba

The net worth of LeboMothiba is estimated to be $2 million approximately. Most of the earnings come from his profession of playing football in his home country.

His net worth includes his properties, cars, houses, and assets. He sometimes flexes his cars and luxuries items on his social media.

Read: How much Rich is Kiana Palacios in 2022? (Net Worth and Earnings)

Contract and Salary at Strasbourg Alsace According to Salary Sport, his yearly salary at Strasbourg is £624,000. It means he earns 12 thousand pounds by playing for his current club.

According to the same source, the highest-paid footballer in Strasbourg is Frederic Guilbert who earns yearly 1.4 million pounds. He is followed by striker Habib Diallo who earns £988,000 per year.

According to transfermarkt, his market value is just 2 million pounds in 2022. His highest value was on December 17, 2018, which was 7 million pounds.

Since then, it has been constantly decreasing. In October of 2020, it was 15 million pounds.

Strasbourg's striker has a partnership with the sportswear manufacturer, Adidas.

Although there is no exact source that can claim the exact monetary transaction between the two parties, they have been dealing for more than 2 years.

Who is Mothiba dating? Is he married?

Lebo Mothiba is currently living a happy love life with his girlfriend Mary Laurie. The couple has been dating for more than 2 years as of 2022.

As per sources, Lebo met his current girlfriend during his time in France. Though they have not revealed the exact date and when they met. The pair are just dating and not currently married. They are living together in France. They must be planning on getting married. However, they have not revealed their future plan.

Read: Who is Dresden's Right-Winger Borrello Dating in 2022?

Who is Mothiba's girlfriend Lori?

Lebo Mothiba's partner, Mary Lori whose original name is Mary Laurie is best known for becoming the wife of the Lebo.

She celebrates her birthday every year on December 1. Lebo always wishes his girlfriend on her special day. On her birthday in 2021, he posted a beautiful message expressing his love. In the photo, we can see the lovers in their arms. ANd he captioned as,

"Happy birthday. my sweet angel. thank you for all the good moments that you brought into my life"

Lori is also a supporter of her partner. In 2019, Laurie also traveled to South Africa from France to support him in the tournament.

Lebo is an active social media user is active on Instagram.

His Instagram id is @lebo_mothiba where he has more than 37,300 followers. He mostly posts about his games, training, time with friends, and friends.

He also has a Twitter id where he has more than 10,900 followers. His Twitter Id is @LeboMothiba11