Lauren Hansen is a rising American college basketball player. She is currently playing in the Southeastern Division for the University of Missouri's Women's basketball team. Lauren plays as a guard for her team and was named 2020-21 First-Year SEC Academic Honor Roll.

Lauren Hansen was born on February 25, 2001, in Long Island, New York. She is among the three children born to Peter Hansen and his wife, Barbara Hansen. Lauren has two siblings, Erik and Jake. After graduating from Ward Melville High School, Hansen enrolled at Auburn University. She is doing her major in Communication. Talking about her physical appearance, Lauren stands five feet and eight inches tall and weighs 60 kg.

Lauren started playing basketball along with her siblings in their backyard. The multi-talented athlete played numerous sports in her middle school and chose to play basketball in her HIgh School. She led the Melville High School to the league title as a sophomore and a junior. Hanse was named into the USA Today First-Team All-State in New York in 2019 after averaging 27.8 points, 6.0 rebounds and 5.0 assists per game. 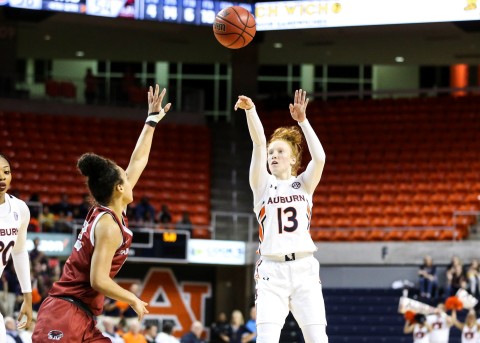 Lauren received numerous offers from universities and committed to playing for Auburn University. Hansen played in twenty-five games in her freshman year and averaged  7.9 points, 1.4 rebounds, 1.6 assists, and 0.8 steals per game. She had missed the first two games and the final three games with injury. Going into the sophomore year, The player decided to transfer to the University of Missouri.

Lauren played twenty-one games for her sophomore year and averaged 6.5 points, 1.4 rebounds, and 1.0 assists in 18.5 minutes per game. At the end of the season, She was named into the 2020-21 First-Year SEC Academic Honor Roll. Many top clubs are keeping a close eye on her. Lauren is sure to earn a top spot draft in the upcoming draft. Many expect her to list her name for the 2023 WNBA draft.

Who is Lauren Hansen Dating? Know About Her Boyfriend nad Relationship Status

Lauren is very much private about her personal life. She has not uttered a single word in public about her love life. Her timeline is filled with photos of her family, friends and games. The player is believed to be single as of early 2022. There is no rumor of her dating anyone in public. Hansen likes to spend her free time with her family and keeps visiting new holiday destinations.

Lauren is yet to start her professional career. She has not signed any professional contract to earn on her own. NCAA does not allow its university to pay its athletes. Universities offer students scholarships that help them to cover most of their expenses. Hansen will be making millions in the days to come from her contract and salary. The average salary of a first-round pick for the WNBA player is more than $120,648.