The Spanish TV presenter who started her career on Marca Gol and La Sexta Deportes in 2010. She then became the co-host of Supervivientes and Gran Hermano covering several sports series.

She is not married yet but was currently dating her boyfriend Fernando Alonso which eventually ended in 2016. Let's know all about his personal life, net worth and career highlights in playerswiki's short bio.

Lara Alvarez was born on 29th May 1986 in Born in Gijon, Spain. Similar to Ana Cobos,  she holds a Spanish nationality and belongs to the White ethnic group. Further, Lara Alvarez grew up with her brother. Additionally, there isn't any information regarding her early childhood and parents.

Talking about her academics background, she first enrolled at College of the Immaculate. Later, she graduated from The Centro Universitario Villanueva, earning a journalism degree.

Lara Alvarez Net worth and Salary

Reportedly, there isn't any information about how much she earns from her professional career. However, she is considered as one of the famous reporters of the recent time, who is known for collecting whopping net worth from the earnings of her entire career.

Additionally, she is currently dating her boyfriend, Fernando Alonso, Formula One driver who is considered as one the richest sports personality, having net-worth over $220 M.

Lara Alvarez is one the popular Spanish sportscaster who has managed to attract peoples attention towards her show. Being one of the sexiest reporters of Spain, she has managed to earn a good amount of salary as well as fame from her professional career.

Lara started working from her early age of 17. In 2010, she worked for the sports shows like "Marca Go" and "La Sexta Deportes". Additionally, She also appeared on "Mediaset" in 2011, working as a reporter for MotoGP.

She also worked for a various network such as "Teleasturias", "Animax" and "Marca TV". Further, she is well known for becoming the host of the reality shows Supervivientes (Survivor), and Gran Hermano (Big Brother).

She co-hosted the show in Supervivientes with Raquel Sanchez- Silva and Jorge Javier Vazquez. Apart from her reporting career, she is also into the field of modeling.

Exploring her personal life, she is a sexy reporter who dated many popular sports personality. Reportedly, she was currently in a relationship with Fernando Alonso. 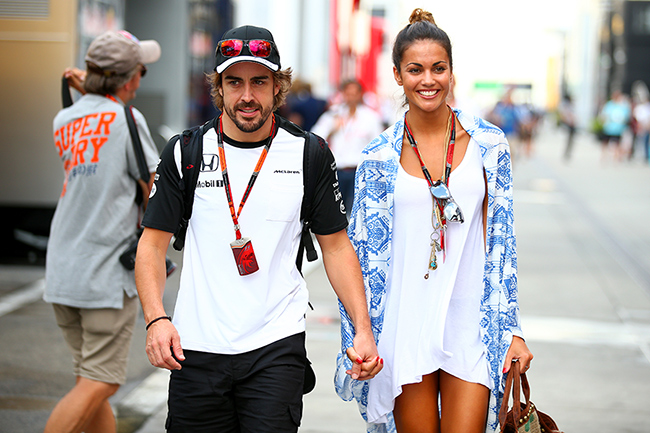 Fernando is a retired Formula One driver, considered as one the all-time greatest driver of the racing world. Later the relationship came to an end in 2016 because Fernando wanted her to stop working so that he can spend time with her.

Previously, She was rumored to be dating Spanish footballer Sergio Ramos. Also, she was in a affair with a famous Spanish businessman Roman Mosterio from 2016-2017.

Exploring her body measurements, Compared to Jimena Sanchez, she also has a sexy seductive body with the height of 5 feet 8 inches and additional information such as weight, dress size, shoe size etc are still under the rock.